Last week we had Spring Break (husband was off all week) and we had such a good time!  It went by so fast though.  It kind of feels good to get back into the swing of things though…back to our schedule.  I love a schedule! 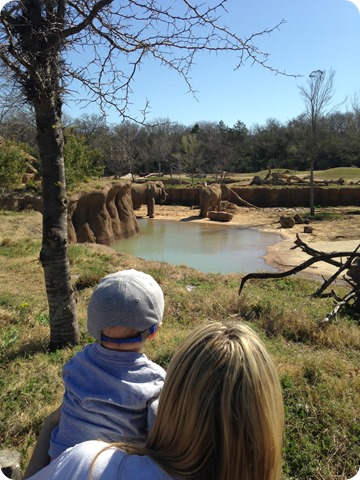 We went to the Dallas Zoo over the break!  This is B seeing one of his favorite animals in person!  He kept making the elephant sound!

If you remember my last grocery/meal plan post, I had spent $257 so far, leaving us with about $62 to spend for the last TWO weeks of March.  Umm…I tried, but afraid I’ll be going over again.  I hate that, but for some reason, I’m having trouble keeping it around $320.  I think it’s a combination of wanting to cook so many different things (I like variety), wanting to buy everything that is on sale, and Beckham eating our food now.  That boy can go through some major fruit.  Can’t wait for summer when lots of fruit is cheaper!

I’ll start with our meal plan and then show you our groceries.

Breakfast Ideas:  Breakfast Sandwich, Oatmeal, Grapefruit, Toast, Eggs and Turkey Bacon, Banana Bread
*I’m also making whole wheat pancakes to freeze for Beckham.  My mom’s banana bread recipe is coming soon!  This is THE best banana bread I’ve ever made.  Maybe it’s because I grew up eating it, but I can’t find another recipe out there that tastes better and I’ve tried a lot!

Lunch Ideas: Chicken Quesadilla, Tuna, Turkey Sandwich, Salad w/ chicken, Taco Salad, Leftovers
*Ryan grilled two chicken breasts Sunday night so we have some chicken to use in recipes this week!  I also plan on making homemade bread this week to see if it’s any good.

Monday – Kitchen is closed!  Going to Cristina’s to use our Buy One Get One coupon we got for completing a 2 minute survey online.

Tuesday – Black Bean Burgers (from last week).  You cook these frozen so they are great when time is short.

Wednesday – Chicken Tacos (2 chicken breasts, sprinkle with some taco seasoning to cover and add 1-2 cups of salsa in a crockpot for 3-5 hours on LOW, longer if frozen.  Shred with fork when done and put back in to stir in the rest of the salsa and then serve in tortilla with your favorite taco mixes).

Friday – Turkey Meatloaf (I made this last week and forgot to take a picture of the final product, so I’ll be sure to take a pic and share the recipe after we eat it this week).

Saturday – Meatloaf Sandwiches (I take the leftover meat loaf, slice it about an inch thick, sear it in the skillet with a little olive oil on both sides which also heats it, then stick it on a warm toasted hoagie roll.  I also put a little light mayo and cheese on the bread when toasting it, if I don’t care about calories).

GROCERIES:  Like I mentioned above, our running tab on groceries was $257.68 before this week.  Eek.

MARKET STREET – $28.86
I could’ve sworn I took a picture, but I can’t find it.  They had some great deals that we had to take advantage of.  I bought 2 pork loins (BOGO, each about 13.50), strawberries (1.97, although they charged me 2.99…need to get reimbursed, but really don’t want to), 4 pounds of ground turkey (3.00 each).
WALMART – $34.76
They had some good sales on cans, so I got a few (.60 each).  I like to start my shopping here because a lot of times their price is even cheaper than other stores’ sale price and also if they don’t have an item, I can grab it at another store.  Oh and just an example of Wal-Mart’s price difference…those Hebrew National beef franks are 3.99, but at Tom Thumb, the exact same item is 5.99!  Chobani yogurt is 1.00 at Wal-Mart just FYI (I know a lot of people eat that, but they’re pricey). 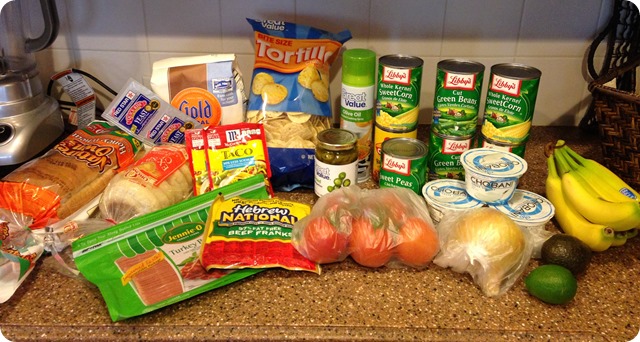 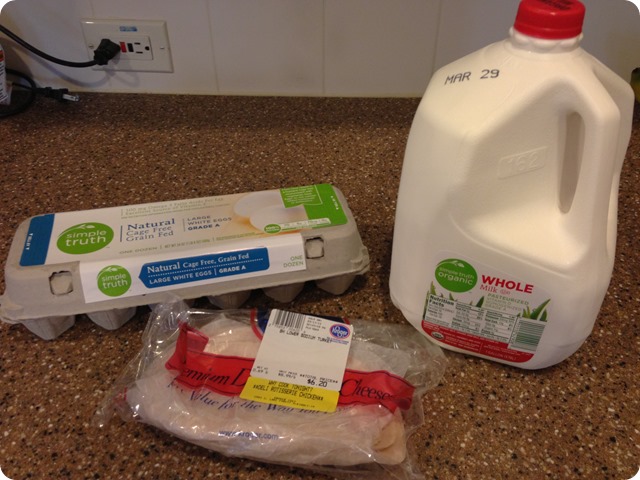 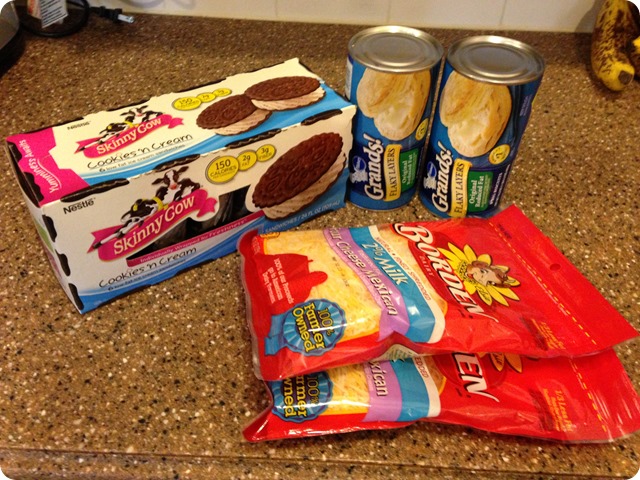