Last year I shared some pictures of our boys’ playroom.  You can see here.  And since then, I’ve changed it up a bit.  It was previously an office before we had kids, but we decided to make it a playroom a few months after Beckham was born.  For some strange reason, I wanted it to be green.  The green came out way mintier than I was hoping, but this was before I learned how important paint samples are (never ever again will I paint a wall without samples).

The green was killing me after a couple of years and once we had a little time and money, we decided to create more of an open/light room with more storage.  We went with grey as the wall color and decorated primarily with white and some metal decor!  The light color really does open it up.

Here is a little before and after to get started… 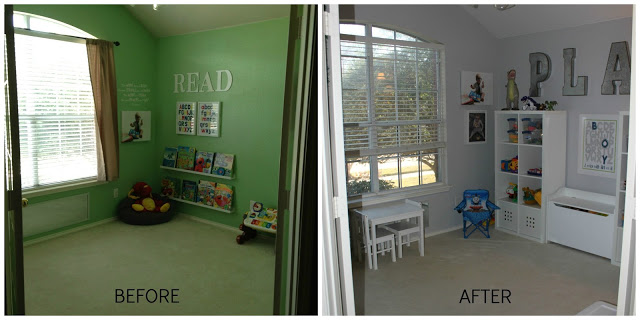 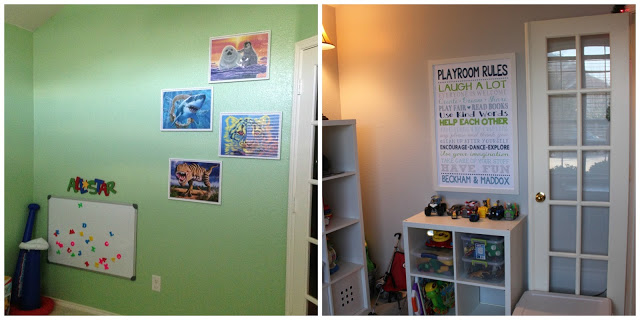 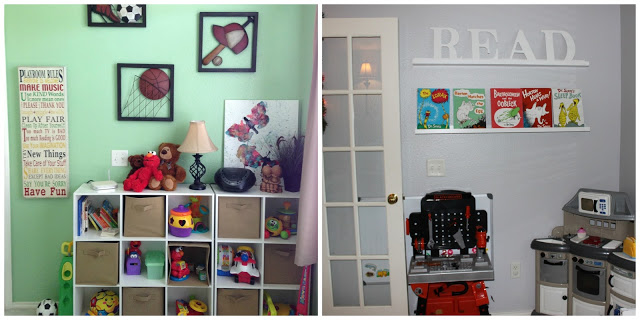 Painting the walls gray was the biggest difference obviously.  If you saw my post on Instagram last year, you saw that I painted this room TWICE.  Once with a purple gray and then again with this lighter gray (more of a charcoal base vs. blue).  I lasted 2 days sitting and cringing at my BOYS purple room, so the following weekend, my parents came over (Ryan was gone) and helped me repaint it.

We also took down the curtains and left the window open.  My mom gave us that table below from IKEA…sometimes it’s in the playroom and sometimes we pull it out for the boys to eat on. 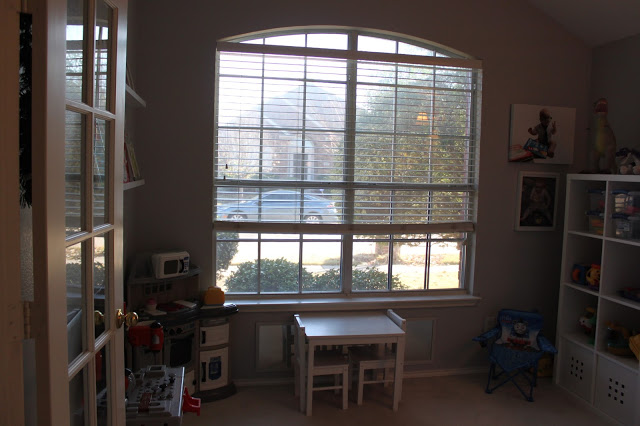 I knew I wanted to word “Play” to be displayed on the wall somewhere, but I could not find any letters that I liked.  My mom suggested metal letters and I thought that was a great idea.  I found these at Hobby Lobby for $30 a piece, but bought them 50% off, making them each $15.  They are each about 20 inches tall.  Well worth the price since they are the major decor in this room. 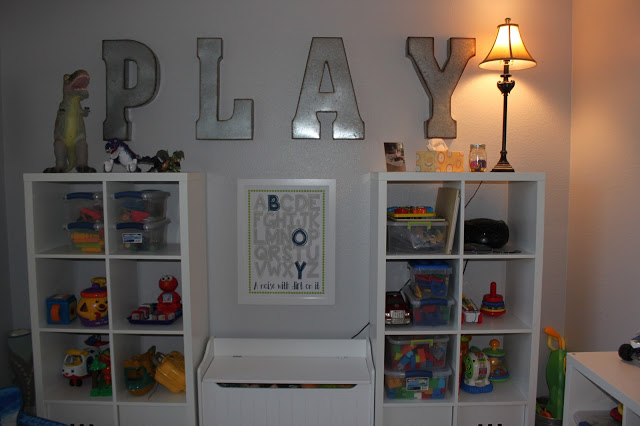 Another big difference is the storage.  The original storage was Target open shelves.  They worked well, but compared to these IKEA shelves, they look dinky. And these are only about $10 more (2×4).  They’re sturdy and so far, there haven’t been any scratches.  I bought two of IKEA’s white storage boxes to go on the bottom cubbies.  They were kind of pricey ($14 each I think), but I’m glad I went with this version.  If you have children that have a talent for destroying any object, these are for you.  The fabric ones wouldn’t stand a chance in our house (B demolished the Target ones).  These are very hard and sturdy and slide in easily.
*When I went to link these for you, I noticed that the price has gone up quite a bit since I purchased these 🙁  I’m pretty sure I bought these for $60, no more than $65.  They’re now almost $90.  Boo, but I’d still get these over cheap ones (kids are crazy).  You can get other colors for cheaper. 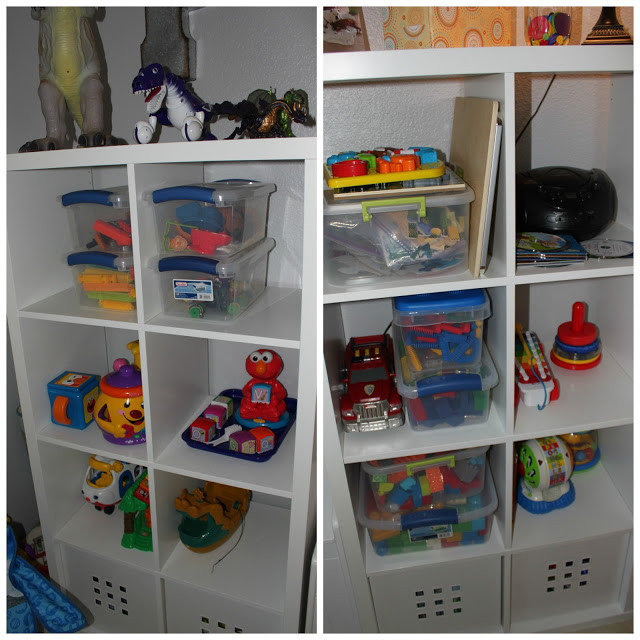 Here are what I keep in the cubbies.  Games, costumes, balls, and some miscellaneous things organized in small bins or bags. 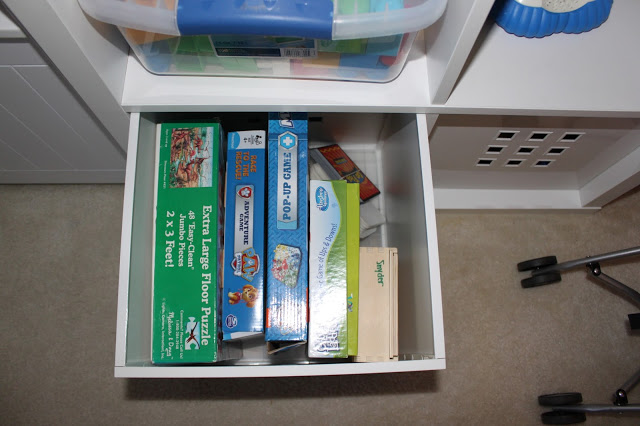 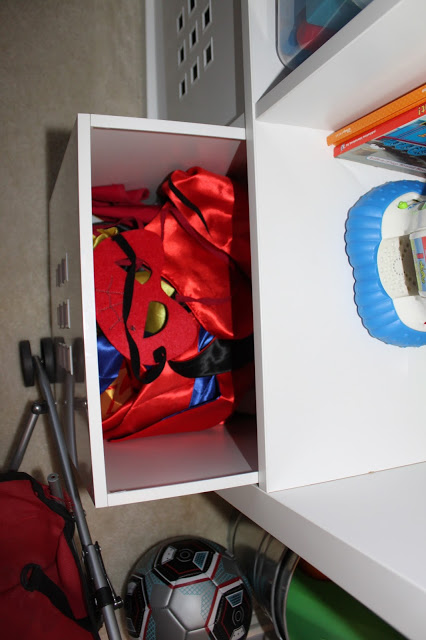 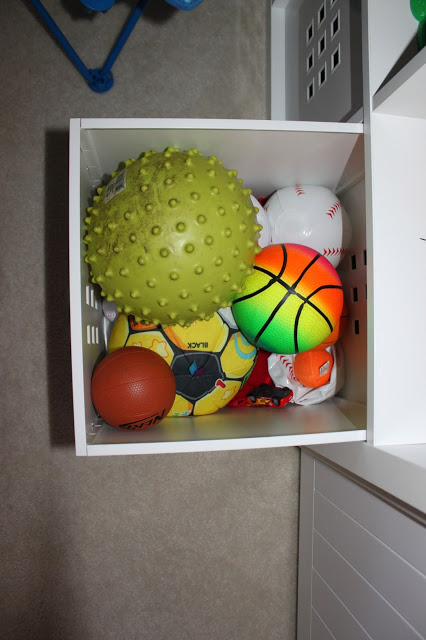 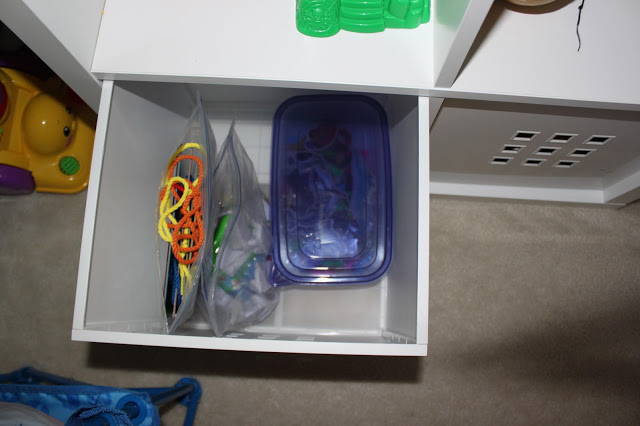 In between each storage unit, I put a toy box that also serves as a bench (but it’s never used like that…sometimes a step stool, but rarely sitting).  I got this from Kohl’s, but can’t find it to link it for you.  We keep stuffed animals, fabric books, and other soft things. 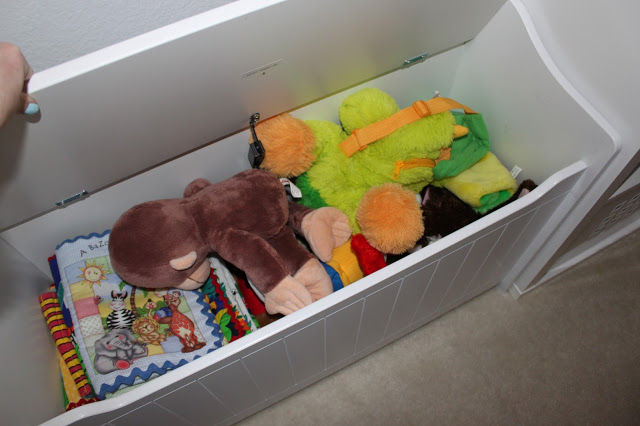 I also added a small 2×2 storage unit, also from IKEA, to house a few more bins and toys.  Beckham accumulated a bunch of Paw Patrol and Blaze cars over Christmas, so we’ve stashed them on top of the unit.  The plastic bin to the right was actually not supposed to stay in here (it started off as baby toys), but has since become a box for junk that won’t store on cubbies or in a small bin. 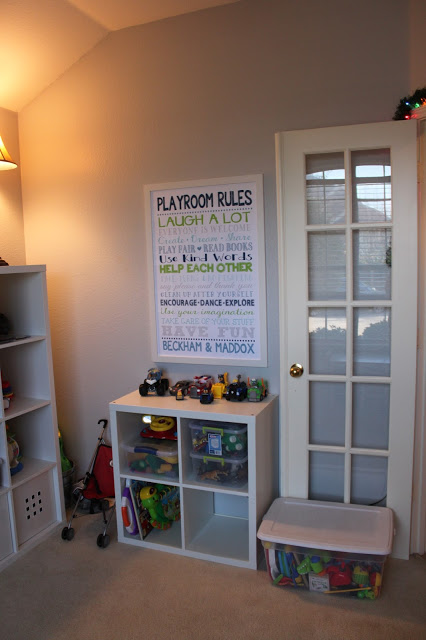 This is what we keep in that bin. 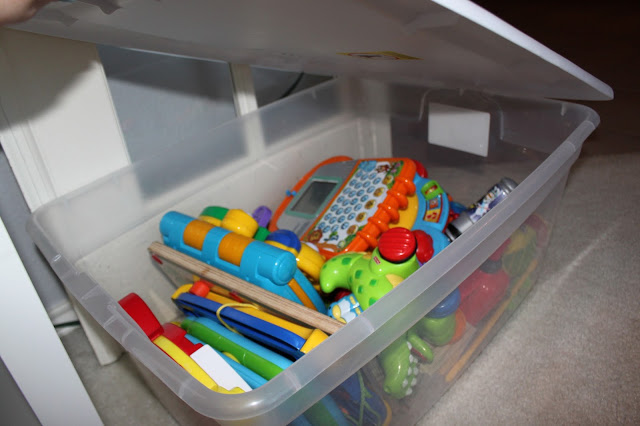 I made this custom “Playroom Rules” sign that is available in my shop.  I bought this white 24×36 frame at Michaels for $15.  I couldn’t believe that price.  It was on sale, but I went back and bought another one of these (different color) and the original price was $20.  I just printed the sign at Office Max and wa-lah! 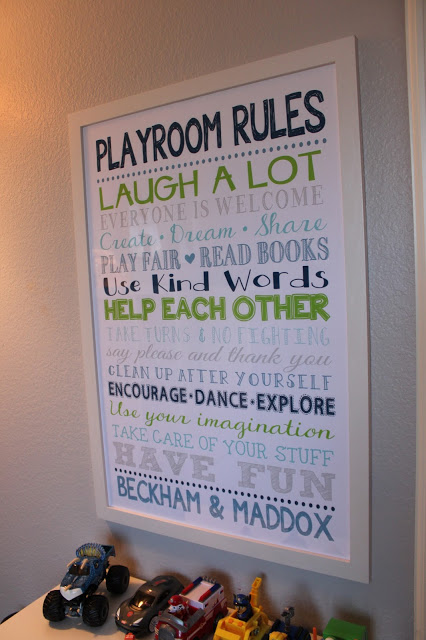 To the left when you walk in is the new tool table Maddox got from Santa and the kitchen (got this for $20 on Facebook a long time ago).   I decorated the wall with floating shelves that are made for pictures.  They’re also from IKEA. 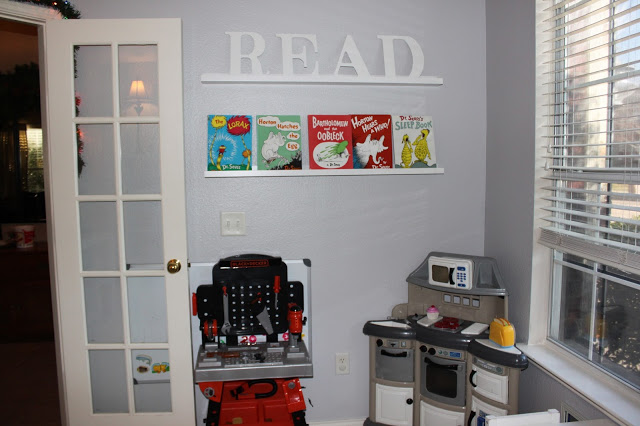 The tool table in action.  My little munchkin! 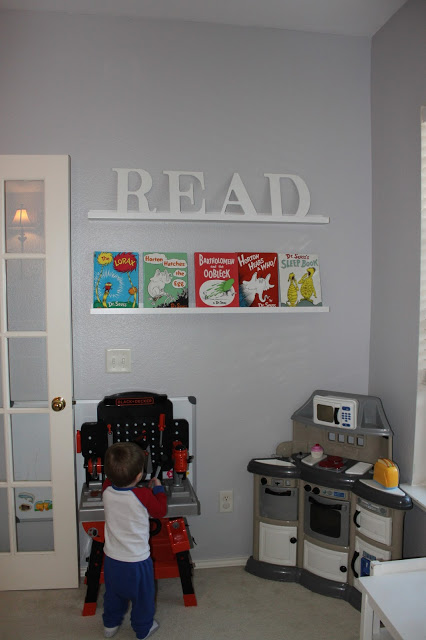 I am a big fan of storage boxes to organize small items that belong together (legos, cars, trains, etc).  Here are some examples of the storage boxes.  I just buy these at Walmart.  They’ve worked great. 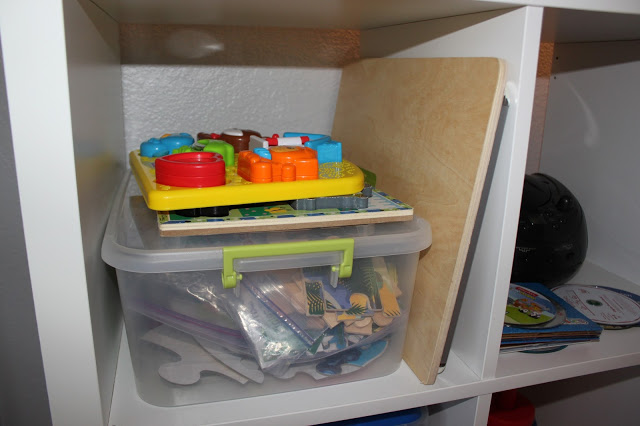 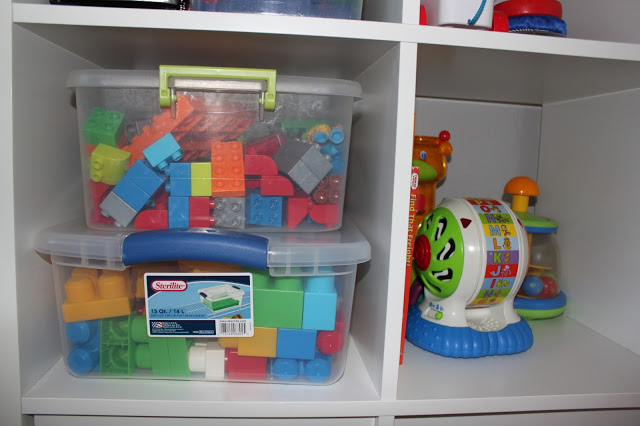 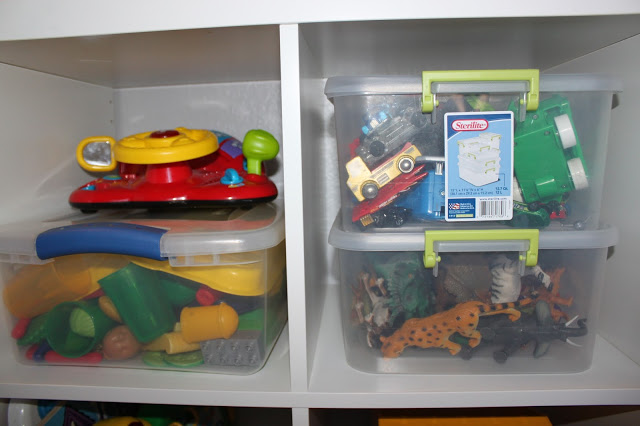 I really like how it turned out.  My favorite part are the metal letters.  It’s also a pretty easy clean up since every toy has a spot, which was one of my main goals when re-doing this.  Hope you liked this! 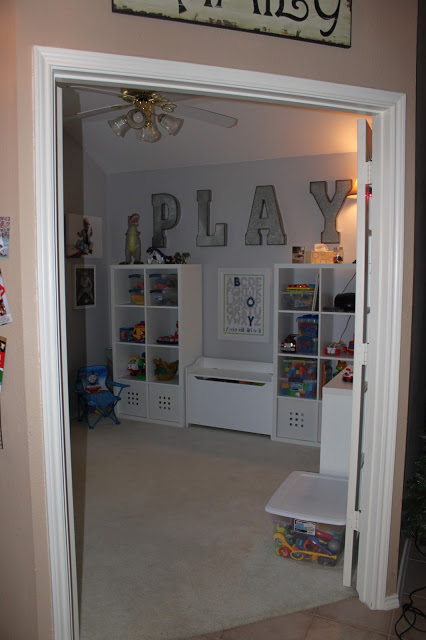