This past weekend was full of events!  We started it off with a visit to the pumpkin patch.  We went with our MOPS friends.

Fun Maze and of course climbing the pumpkins! 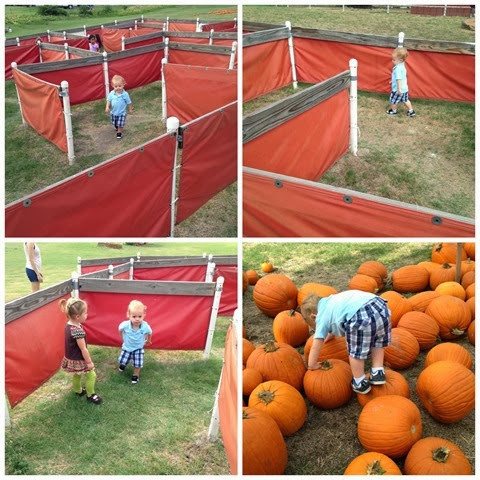 Feeding the animals!  Holding hands with his friend Faith! 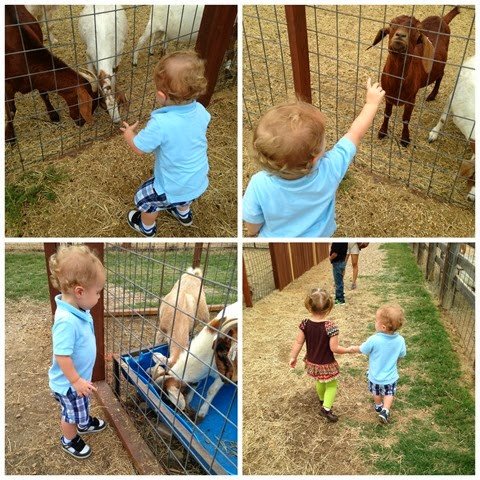 Hayride!  Pictures with the scarecrows! 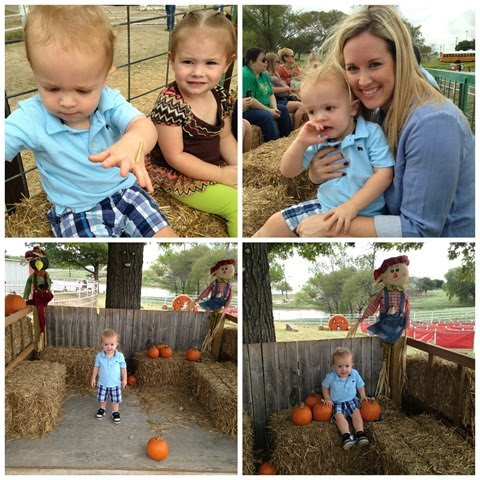 My college, SMU (Southern Methodist University for those of you far away), had some events this weekend for the women’s soccer alumni.

Friday I went to the Letterman’s Dinner, which was honoring the 2003 Women’s Soccer team, along with the 1983 Football team.  It was a great evening for an outdoor dinner!  As I was driving up to campus, all of my college memories started flooding in and I realized how much I missed it.  I LOVED college and wanted to go back and relive it while I was there.  The campus was BEAUTIFUL when I was there (one of nation’s top colleges), but they’ve added so many amazing new things since then to make it even better!

Driving down the boulevard (the main attraction at SMU)…where tailgating occurs! 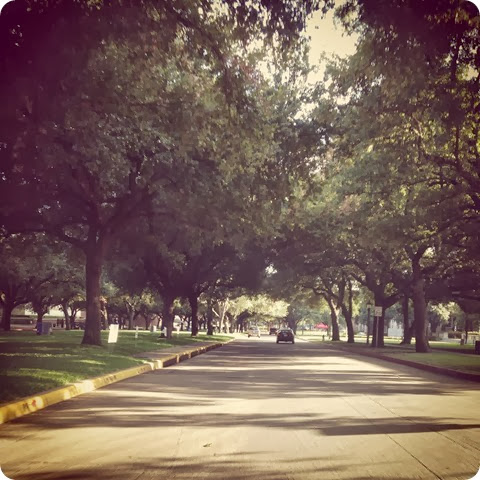 Some of my old teammates at dinner in the football stadium! 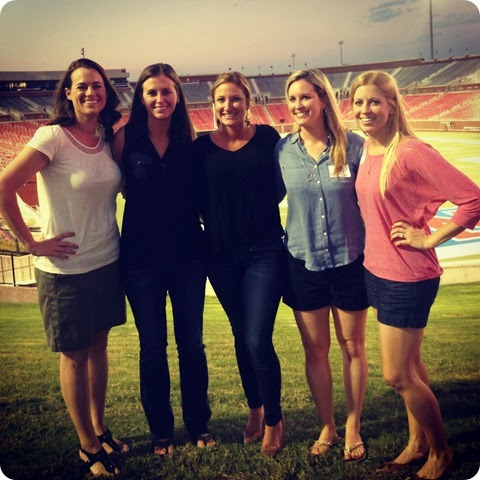 On Saturday, we went to the football game to be honored at half time as well.  It was fun to go to a game since we didn’t attend many in college.  Football and soccer season coincide so most weekends we had home games, the football team was away and vice versa.  It was cold and rainy, but still fun!

On the jumbotron at halftime! 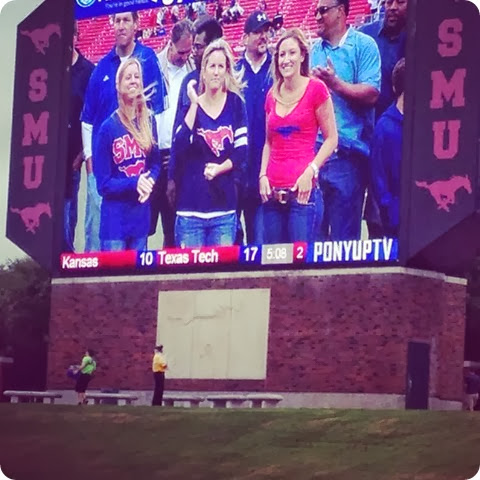 I had planned to go to the alumni game on Sunday, but then the scariest thing happened on Saturday night!  I stayed with my parents this weekend since Ryan was out of town.  We decided to do a little shopping on our way to dinner.  When Beckham was in the store, he fell out of a shopping cart and hit his head.  The cart was a smaller one and the floor was carpeted…two things I’m thankful for.  My mom was with me as we were consoling him in the car.  My dad had decided to head to the next store while we finished up so he was gone (he left before this all happened).  I consoled him in the car just sitting in the parking lot.  He kept trying to go to sleep.  We were a little worried, but there was no bump and he was conscious.  So we put him in the car seat and headed on.

I was driving and my mom was in the back with him.  I kept hearing her say “No no Beckham, stay awake.”  I started to get more worried.  My mom was looking up whether or not we could feed him if he did in fact have a concussion.  As she was doing that in the car (about 5 minutes after the fall), he started vomiting like CRAZY!  I mean so much and repeatedly.  I was at a light waiting to cross a highway intersection, so I couldn’t even pull over.  It was the most helpless, chaotic feeling I’ve experienced!  Beckham was crying, my mom was frantically trying to talk to my dad and find a hospital and calm Beckham, while catching his throw up.  I’m freaking out trying to just MOVE and find a hospital!  After what seemed like an hour of chaos (probably 5 minutes), we found Children’s Medical Center.

We pulled up to the ER and I rushed him in!  I was just trying not to cry as I talked to them.  They were SO awesome and I cannot say enough about the amazing treatment we received.  Long story short longer, we got him checked out by the doctor, had to get some head x-rays, and they gave him some Motrin.  The doc said it looked like his skull did its job and protected his brain.  No skull fracture and he was back to his TOTALLY NORMAL self within two and a half hours of falling!

Poor thing!  Babies in hospital gowns are the cutest ever. 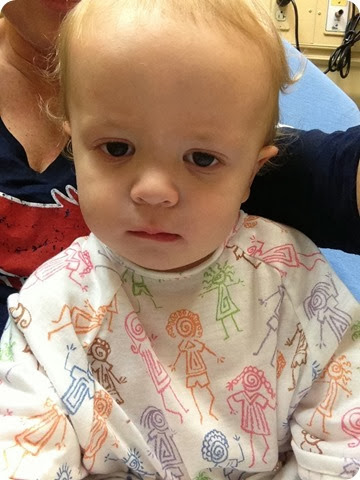 Finally eating!  He was starving! 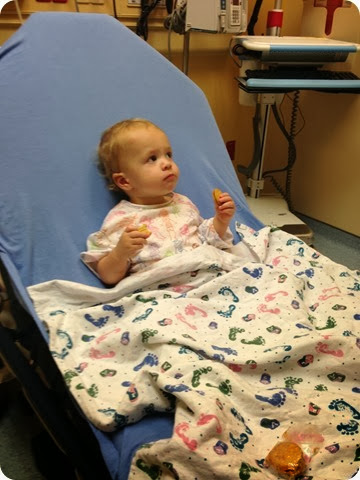 All night TV…okay!  And he was in charge of the remote!  He calmly sat on the bed for about 10 minutes…the rest of the time he was running around the room! 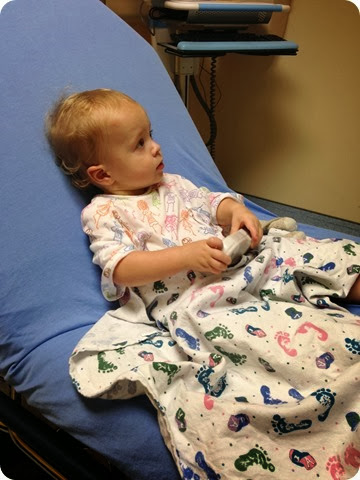 He totally soaked up the royal treatment of cartoons, a big bed, food and juice, and a new room to run around in.  We had to stay there a total of 4 hours before being released to make sure everything was okay.  My parents were with me the whole time (Ryan was out of town this weekend).  I’m so thankful for them!  I honestly do not know what I would have done if he was throwing up in the back and I was by myself.  My mom even cleaned up all the throw up in the car seat so he could at least sit on a non-chunky (sorry) seat for the car ride home.  My dad had to be at the airport the next morning to head to Japan…yea my parents are awesome!  Around 10pm we all left the hospital and I headed home.

My mother in law came over and stayed the night with me since Ryan was not home.  She’s a nurse as well, so it was nice to have her there.  If something had happened during the night, I’m not sure I could’ve handled it by myself.  And good thing nothing did because the car seat was in a million pieces being washed! 🙂

After his bath and seeing Gramma, he was happy and slept like a baby!  He woke up and was jumping up and down in his crib.  I think he was showing off for Gramma!  I checked on him before I went to bed at 2am (I had orders to complete), but she got up and checked on him a couple times as well.  And if it wasn’t nice enough for her to be there, she ran and got me Starbucks in the morning since it had been a long night…I mean that is huge right there!

Needless to say, I had great support in the absence of my hubby, although he was very supportive via phone!  God’s angels had my baby in their arms even though he fell.  I’m sure this will be the first of many hospital visits, but boy was it a scary experience.  Amazingly, things went perfect in the situation.  He’s a trooper and is acting like nothing happened.  Well, I lie…since we made such a big deal about his “boo boo,” EVERYTHING is a “boo boo” now.  And there is absolutely no climbing right now 🙂

(Visited 66 times, 1 visits today)
I’ve Discovered THE BEST PANCAKES
FREE Grocery Planning Template and How I Use It