It actually took us 3 days to name her, but we’ll get to that later. 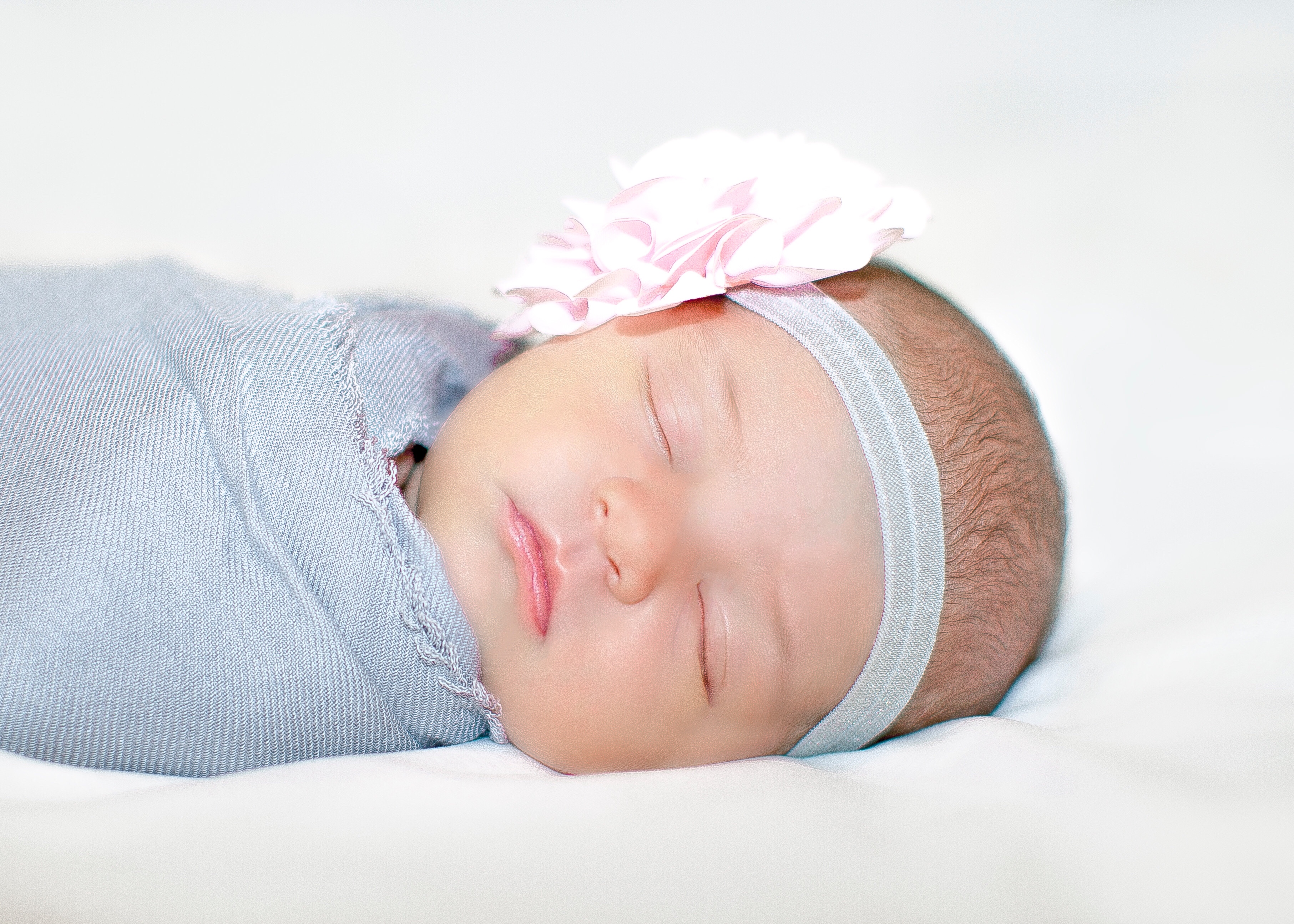 If you read my last pregnancy update, you knew we were scheduled for an elective “induction” (water breaking) on Friday, October 6th.  We had to be at the hospital at 7:00am and they would break my water and let labor start.  My due date was October 7th so I was a little nervous about the chance of not going into labor after they broke my water (even though I had already gone through early labor the week prior).  With a VBAC, you can’t induce labor with medicine like Pitocin, so if my body didn’t naturally go into labor after, I’d have to get a c-section. 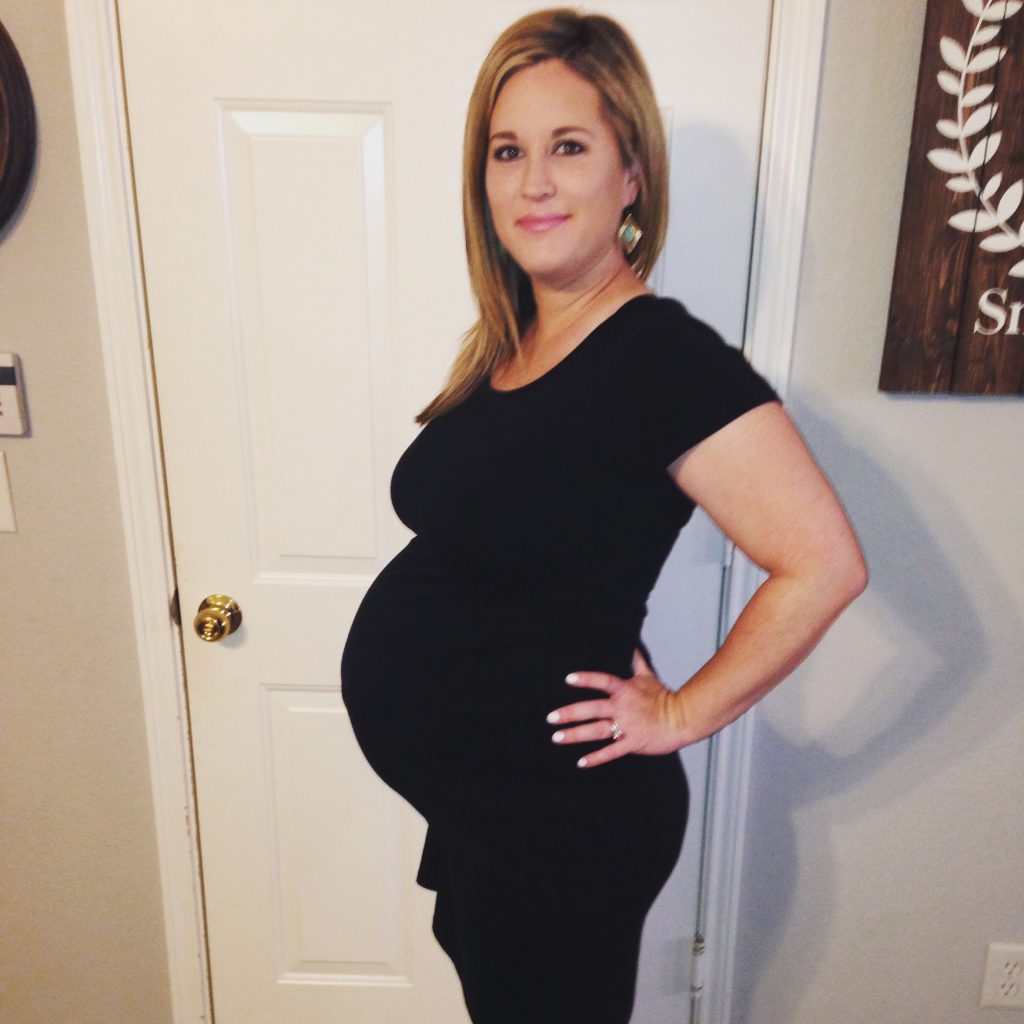 On Thursday (10/5, the day before I was planned to have my water broken), I felt funny all day and lost part of my mucus plug twice that day.  I went to bed that night around 10:00pm since we had to leave around 6:00am.  I had tons of Braxton Hicks contractions that day but that wasn’t too abnormal.  The overall feeling I had was that I was about to start my cycle.

I kept telling myself to make it to 6:00am since that’s when my mother in law would be at the house and we could then head to the hospital.  I told Ryan I was having bad pains but I wanted to time them to see what was happening.  I’m not even kidding, as soon as that first one started, they were 2-4 minutes apart!!!  I timed them for 15 minutes.

I got a little nervous as they were pretty hard contractions and coming on fast.  I texted my mother in law and she was on her way.  In the meantime, I called my neighbor across the street and asked if she’d come over until my mother in law got there so we could head to the hospital.  The hospital is 30 minutes away so we really needed to get there.

As soon as we headed off, my contractions were 2-3 minutes apart and even stronger.  Ryan put on our hazard lights and sped down the highway.  I could breathe through the contractions, but it was taking more concentration to not tense up.

We got to the hospital around 4:00am and as soon as I walked across the hospital doors, my water broke.  Awesome.  With each pregnancy, my water broke on it’s own (once after being admitted and twice before getting to hospital).  We entered through the wrong part of the hospital (directions were confusing and I was delirious).  A sweet lady let us in and asked me if this was my first…when I replied “no, it’s my third”, she rushed to find help.  She could tell I was in pain and my wet jean shorts didn’t help.

They brought a wheelchair to me and took me to get admitted.  We were in the room by 4:15am. She checked me and I was 5cm.  And then the contractions got pretty bad.  I had to lay down while they spent a good 30 minutes trying to find a spot to insert my IV.  It took one prick in my left hand and 3 nurses later to finally get an IV in my RIGHT hand.  Those 30 minutes were terrible as each contraction was pretty tough to get through.  Around 5:00am I decided to get on the birthing ball and see if that helped.  Nope.  Nothing really helped.  I had Ryan push on my back but my contractions were primarily in the front.  I kind of wish they were in my back more so I could get some relief with pressure.

This is where I thought I was going to pass out and throw up from the pain.  The problem was there was no rest time in between it felt like to prepare for the next contraction.  It was like I couldn’t breathe.  Literally, hard to breathe.  I needed to take some deep breaths but couldn’t catch my breath.  Moaning had begun and all self consciousness went out the window.  I finally yelled to Ryan that I couldn’t do it anymore.  In hindsight, I think I was in transition…I wish I had them check me for progress so I could see if I had dilated anymore.  I kept thinking “I’m a 5, I’m a 5″…there is no way I could go 5 more cm at that pain level (I’m pretty sure I was closer to a 7 or 8).

Around 5:40am, the anesthesiologist came in to give me an epidural.  I told him my fears of the meds based on my last labor and delivery and he gave me a “mild cocktail” as he called it.  Y’all, it was the perfect epidural.  I could feel so much but my contraction pain in my stomach was gone.  I could move my legs and could still feel each contraction in my “lady parts” (sorry, birth stories always get tmi).  I could literally feel her moving down the birth canal (felt like pressure in my bottom, like I needed to go to the bathroom).

After the epidural had been in my system, my doctor came and checked me.  I was 9 cm!!!  Sometime in between the epidural and pushing, I very quickly put on my makeup.  Yes. Yes, I did.  No shame in my vain birthing game.  I remember putting on my makeup and stopping at each contraction, feeling her come down the canal. 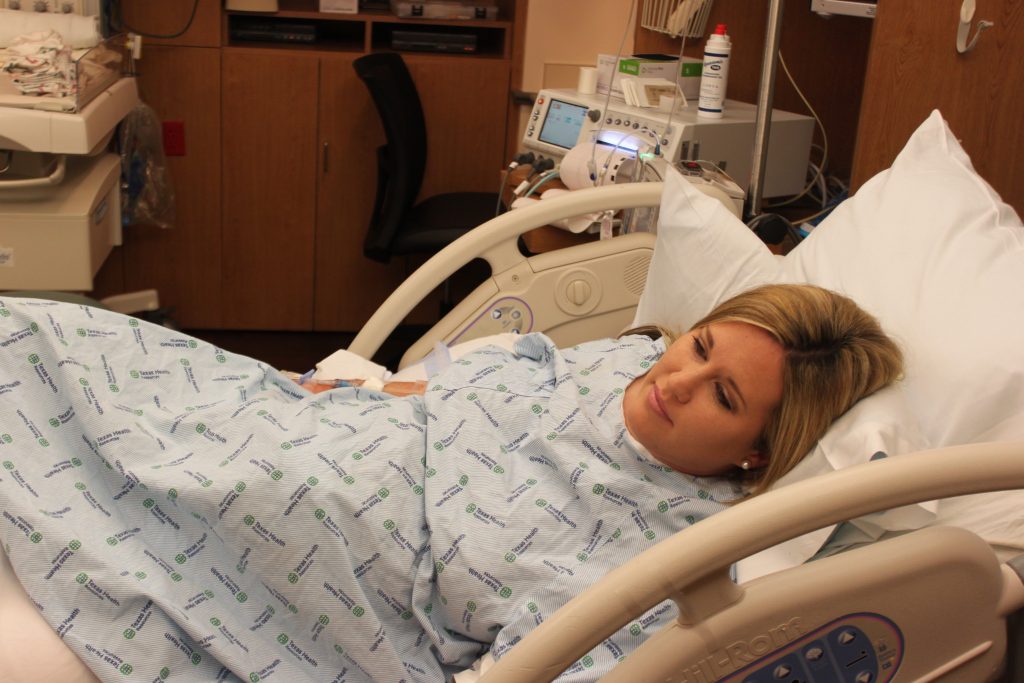 This is a picture of what I looked like as she made her way down…she was born minutes later.

Just before 8:00am, he checked me and I was 10cm!!!  The previous 10-15 minutes, I felt each contraction and it felt like I needed to go to the bathroom.  I knew she was making her way down and I let her do a lot of work before I was going to push.  I was terrified to push as I spent 2.5 hours pushing Maddox out!

At 8:01, I gave my first push.  I could feel her head.  The doctor told me to give one big push and her head would come out. Sure enough, the next push, and her head was out.  I pushed 2 more times and she was all out!  I could not believe it.  It was so fast and so much easier.  It helped being able to feel it as I knew how hard to push.  She was born at 8:04am!

Sweet Brielle was placed on me directly after and she was screaming her head off!  I loved it!  Ryan and I both looked at each other and said how tiny she was!  She looked so small.  We were all sure she was 7 pounds (even the doctor said that).  After I got to hold her a while, they asked if we wanted to weigh her. 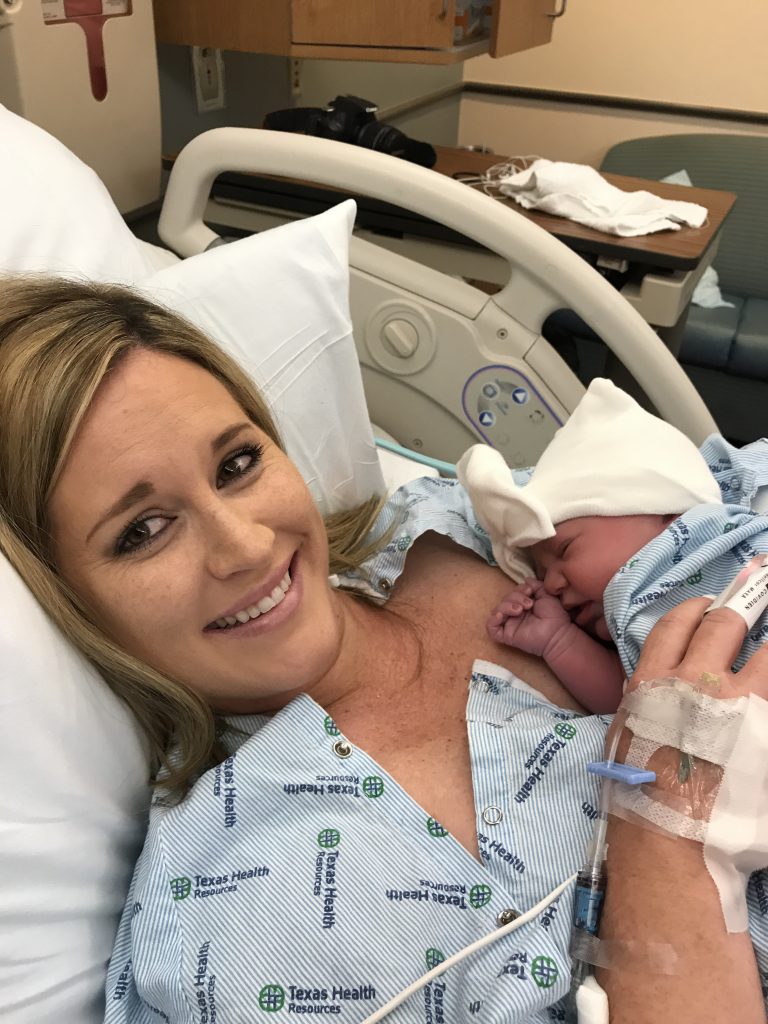 I wish I could relive this moment over and over.  I’m sad we didn’t get pictures like we did with Maddox, but everything went so fast and happened so early in the morning.

She ended up being 8 pounds 6 ounces and 21 inches long (they measured her length later).  I was shocked she was over 8 pounds as she didn’t look it. 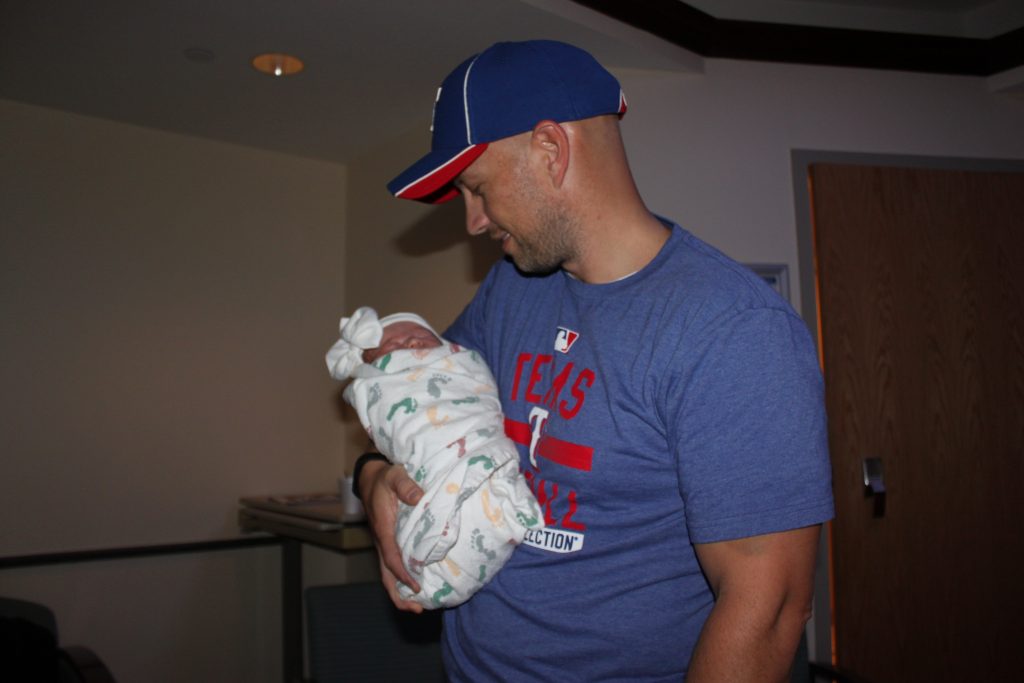 Ryan holding his one and only daughter for the first time!

I had no tears or stitches!  Everything went so smoothly and I was feeling so good.  And then came a dramatic recovery.  As I was laying there with Brielle and being monitored as usual, I started clotting.  I could feel the clots and knew that wasn’t good.  The nurse tried Pitocin to get my uterus to contract (clotting happens when your uterus doesn’t contract and make you bleed).  After an hour or so, I still had clotting so she called the doctor in and he had to examine me to see if any of the placenta was still in me and causing this also.

They had to do a vaginal “extraction” and make sure all was out.  It was going to be a pretty painful procedure so I had to get more epidural!  The room went from calm to crazy in about 10 minutes!  It was flooded with 10 or so people and I was a little nervous.

My new epidural was so strong (same IV just new meds)!  My legs were completely numb and I was officially mad!  All that ease of delivery and now I ended up having to get another epidural.  But, making the decision to get the epidural in the first place ended up being a blessing in disguise.  Had I not gotten it during labor, they would have had to put me under to do the extraction.  So, I’m glad I ended up doing it.

After all was done, I had to stay in that room another 1-2 hours to make sure I had no more clotting.  We didn’t even get up to the postpartum room until after 12:00pm.  Crazy that my labor and delivery was shorter than the actual recovery in that room.

But, overall, I’m super grateful for how everything turned out.  We had a healthy baby and I got to experience labor a lot different than my first two.   I’m still amazed at the human body and what it goes through when birthing a child.

Has anyone had a similar birth?  Do you feel your births have gotten easier?  During my pregnancy, I went to a chiropractor and I can’t say it didn’t help.  I will post about that soon, but will always recommend chiropractic care during pregnancy, especially if someone is doing a VBAC or has had a difficult delivery previously.

Thanks for all the support during my pregnancy. 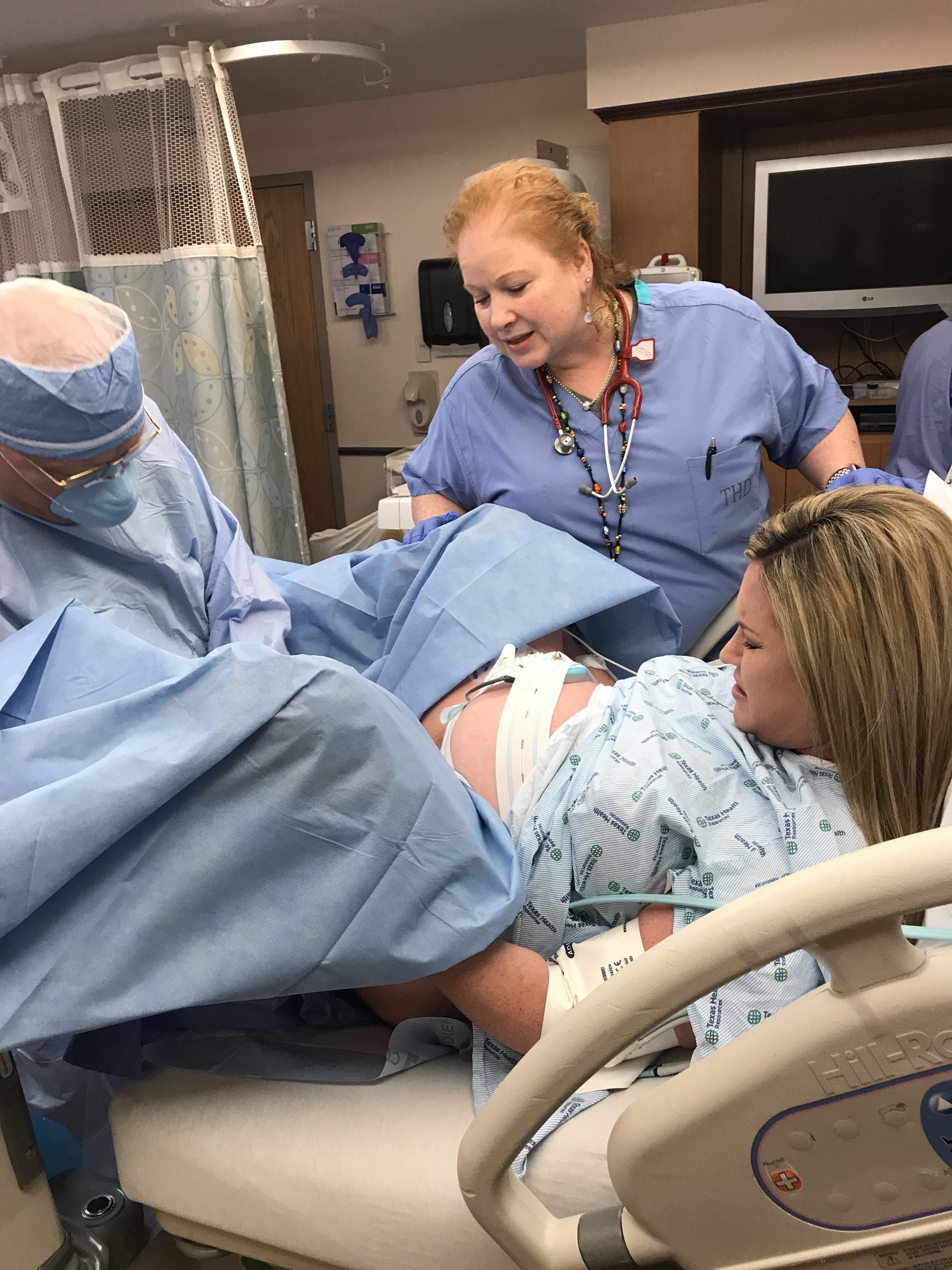 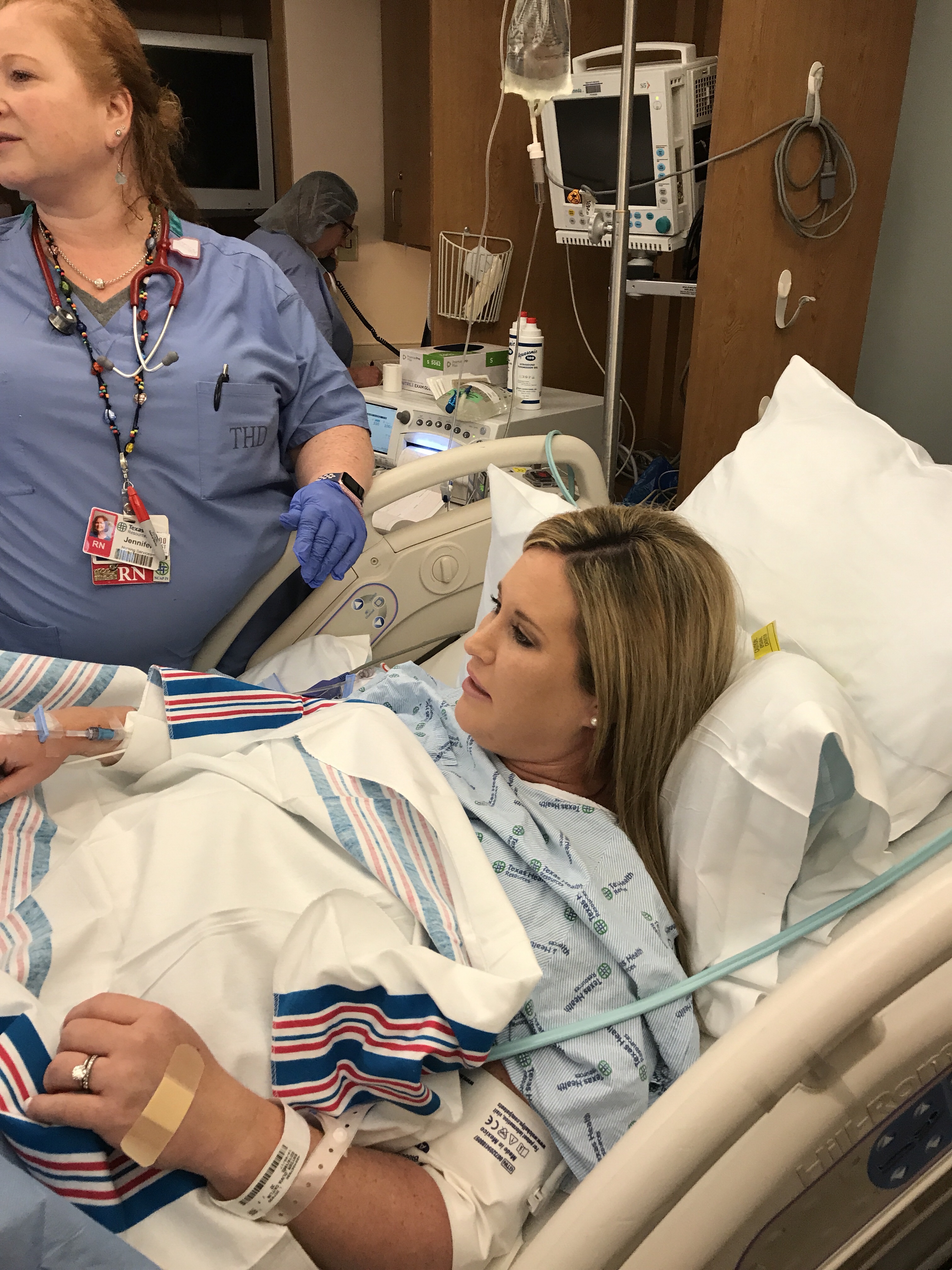 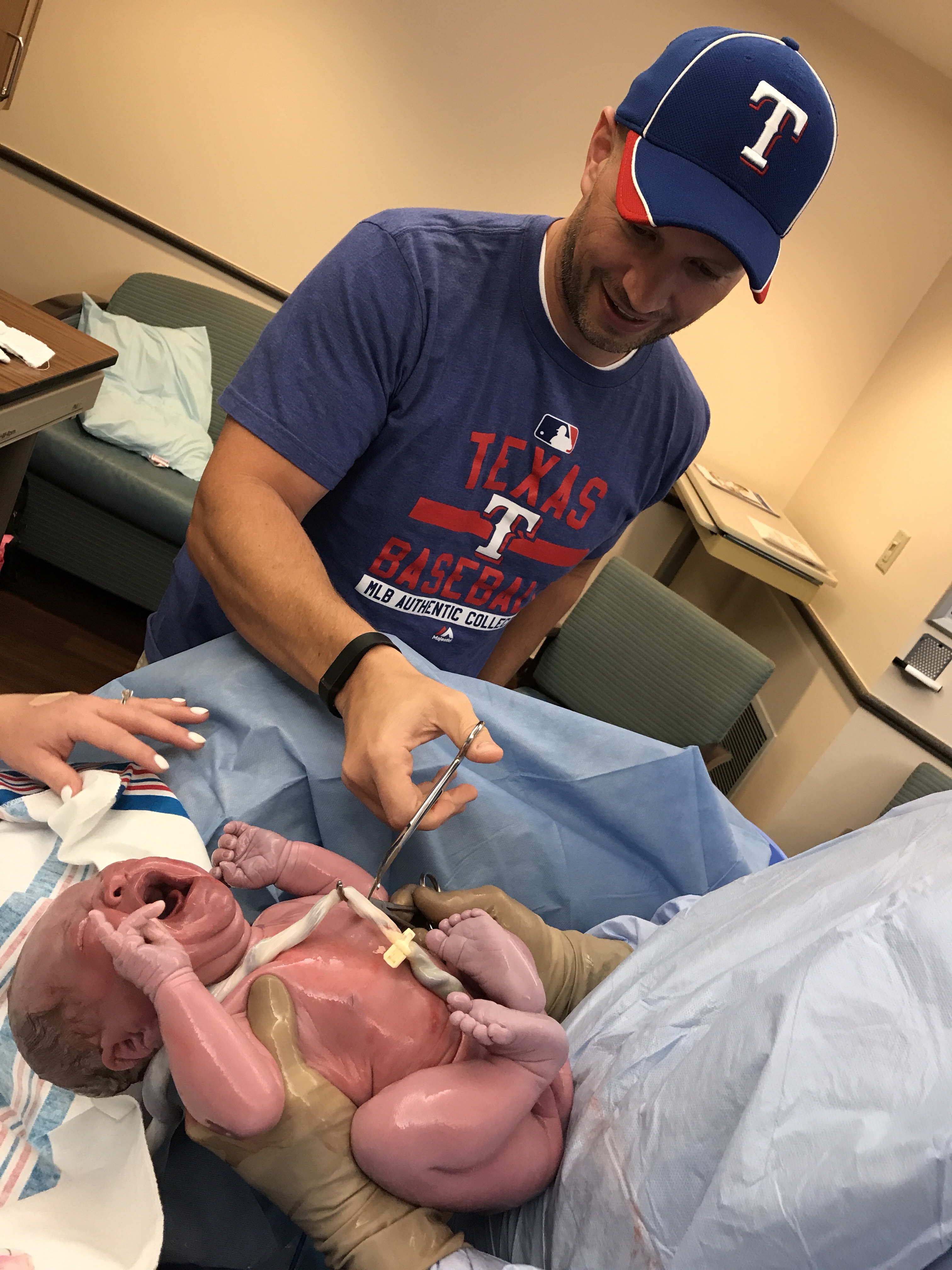 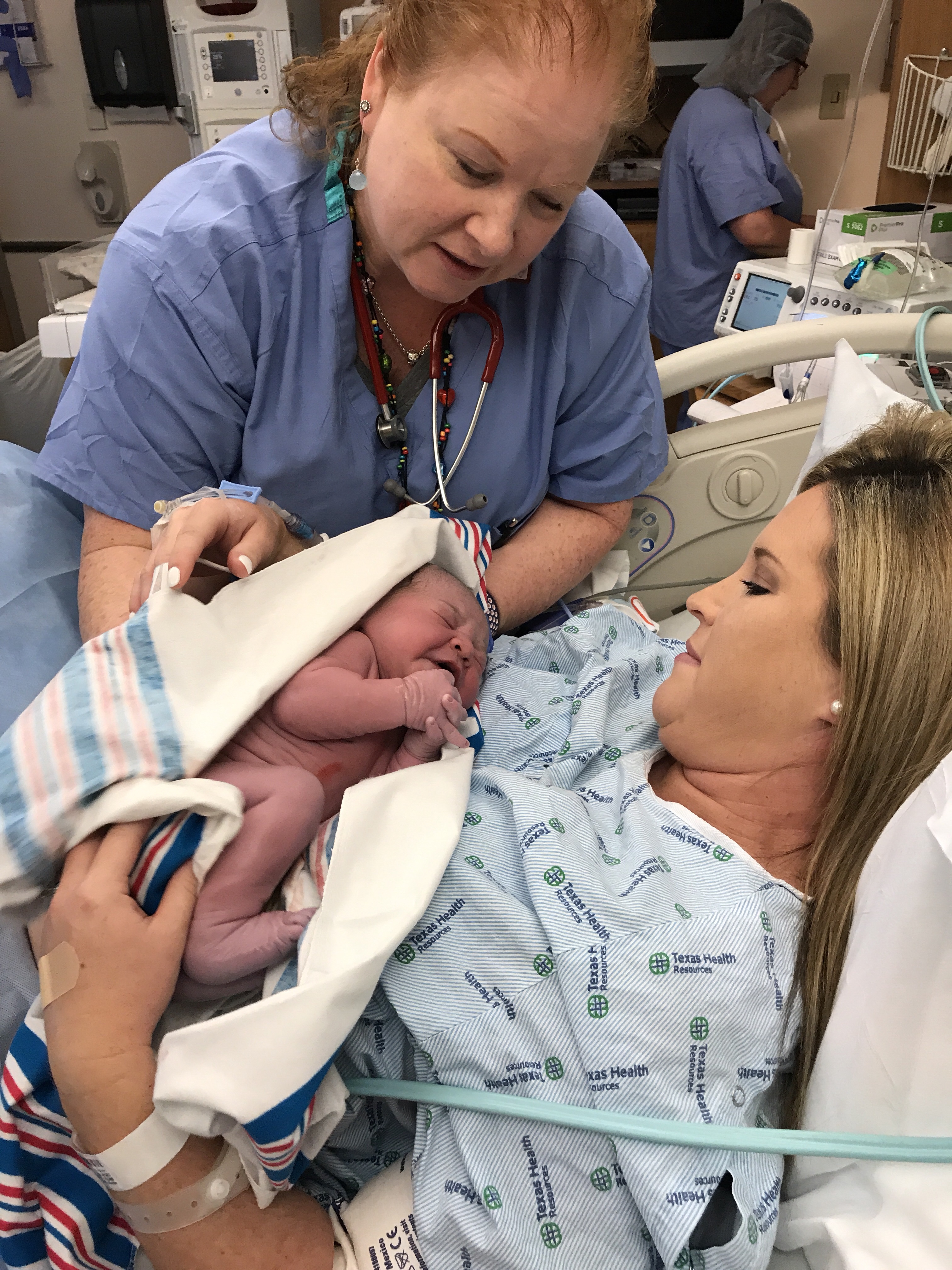 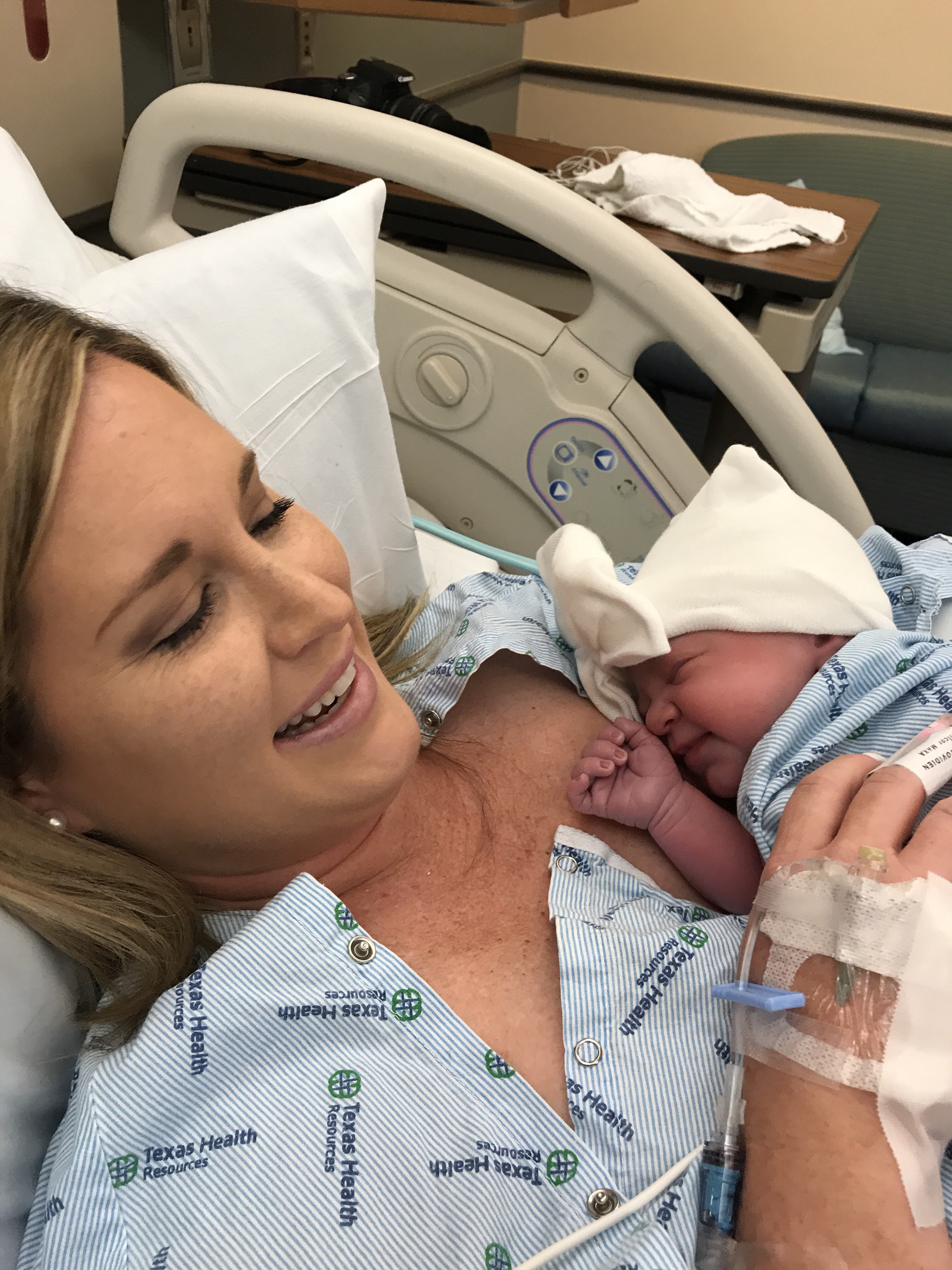 The nurse who helped deliver her made this hat for her. She brought it in and I just thought that was so sweet! 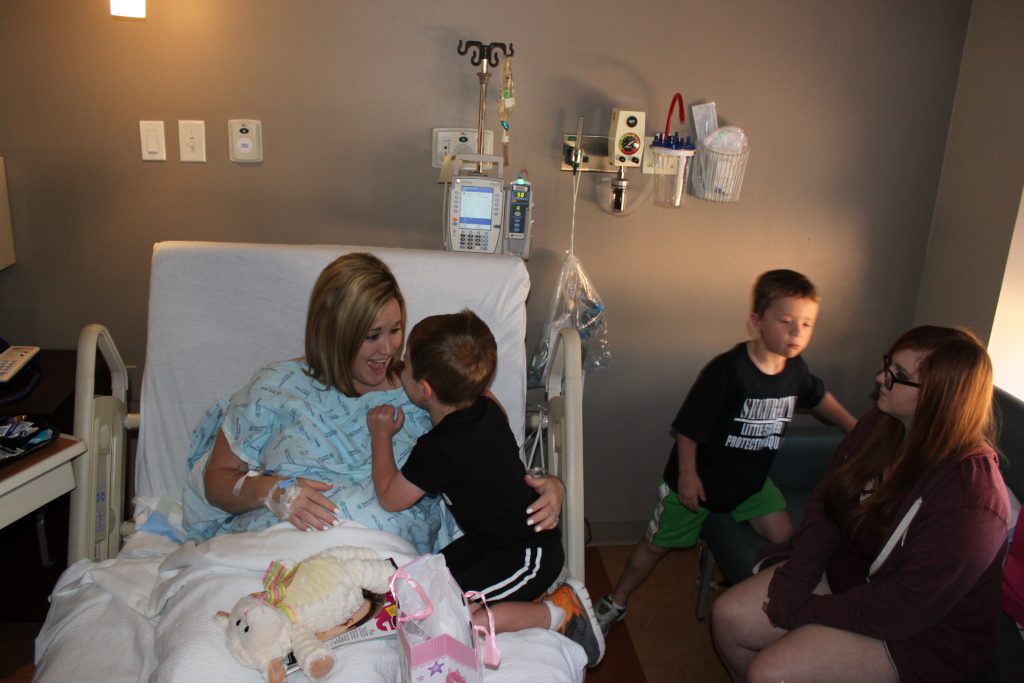 Seeing Maddox after having Brielle made him seem 2 years older.  He looked so big!  He’s my mama’s boy and was telling me something really exciting! 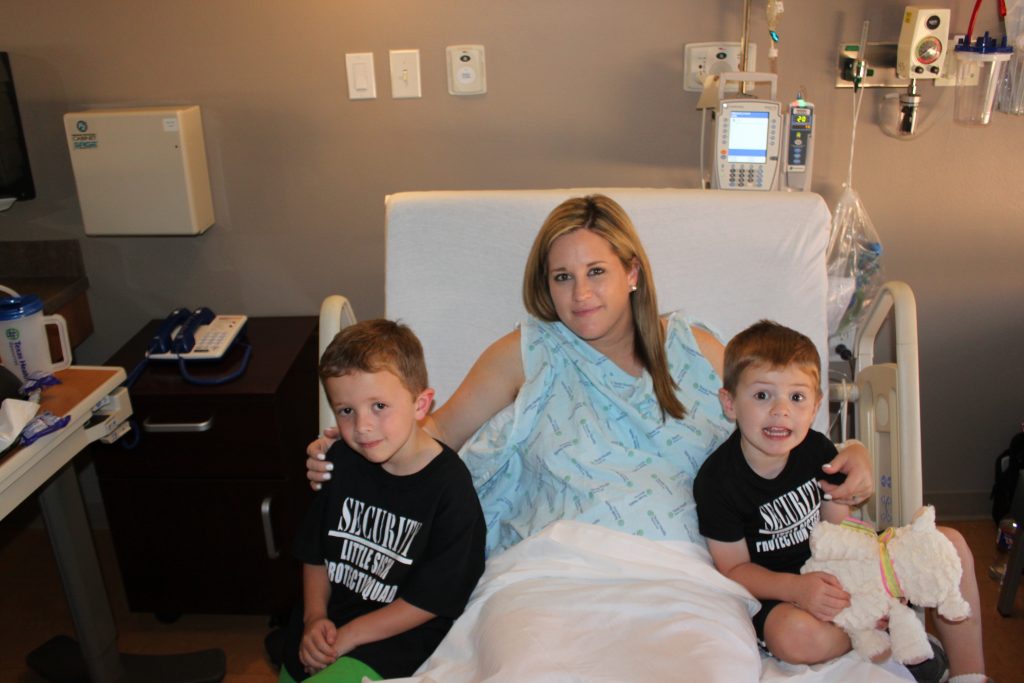 So good to see my boys!  I love their shirts! 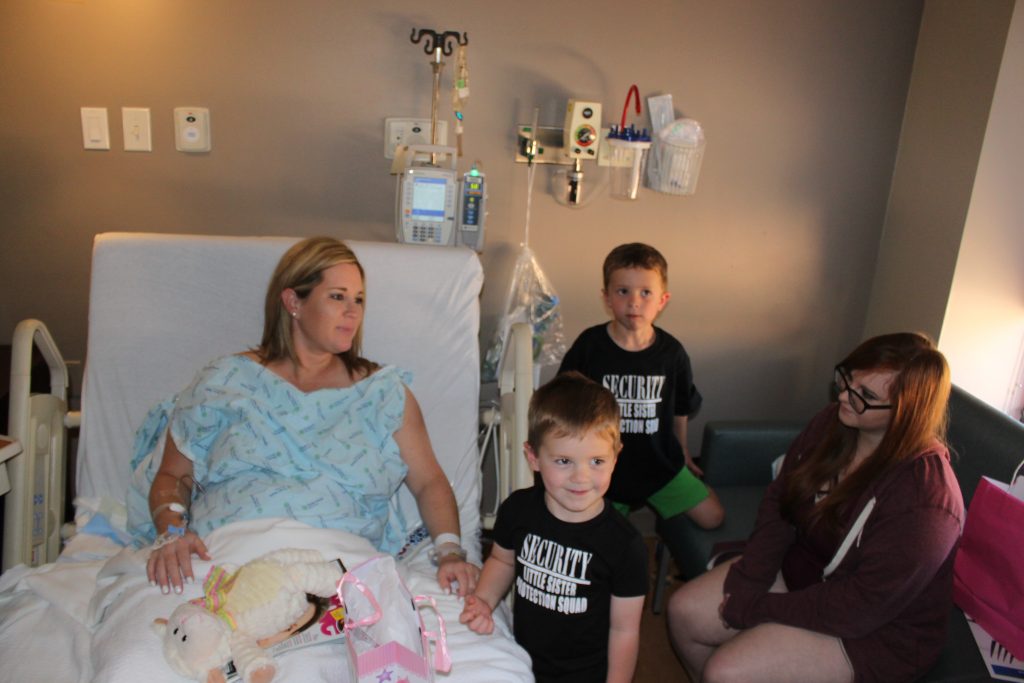 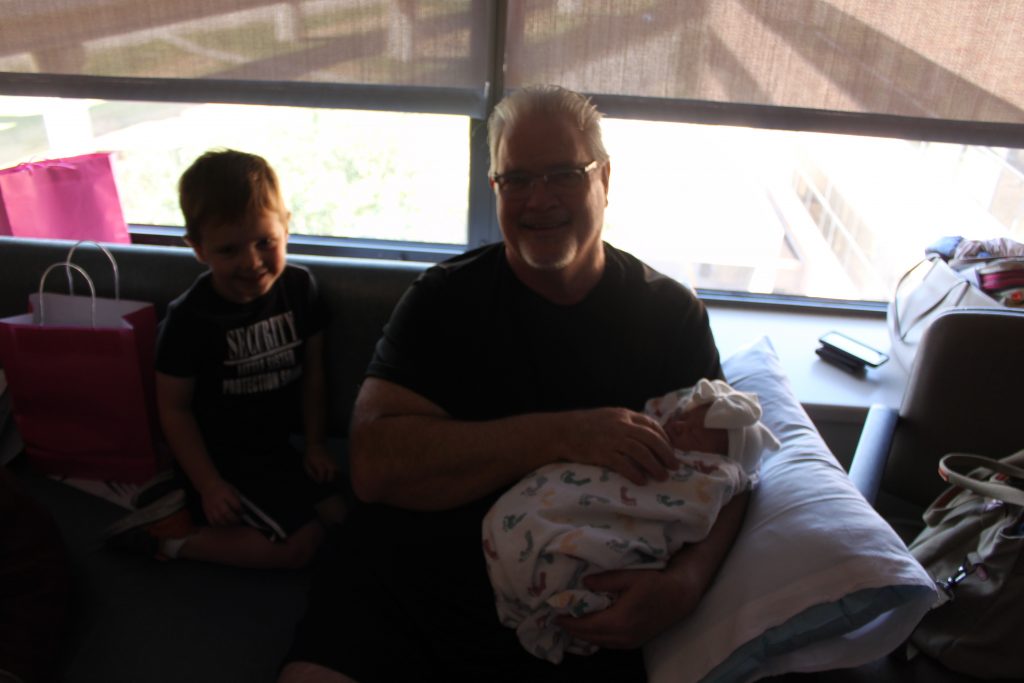 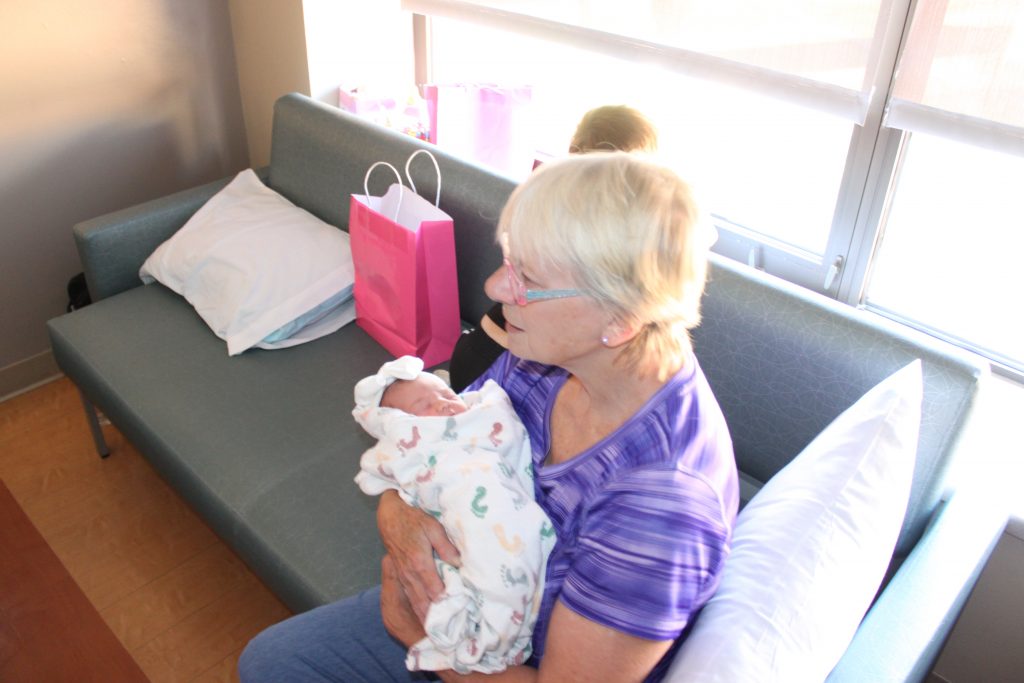 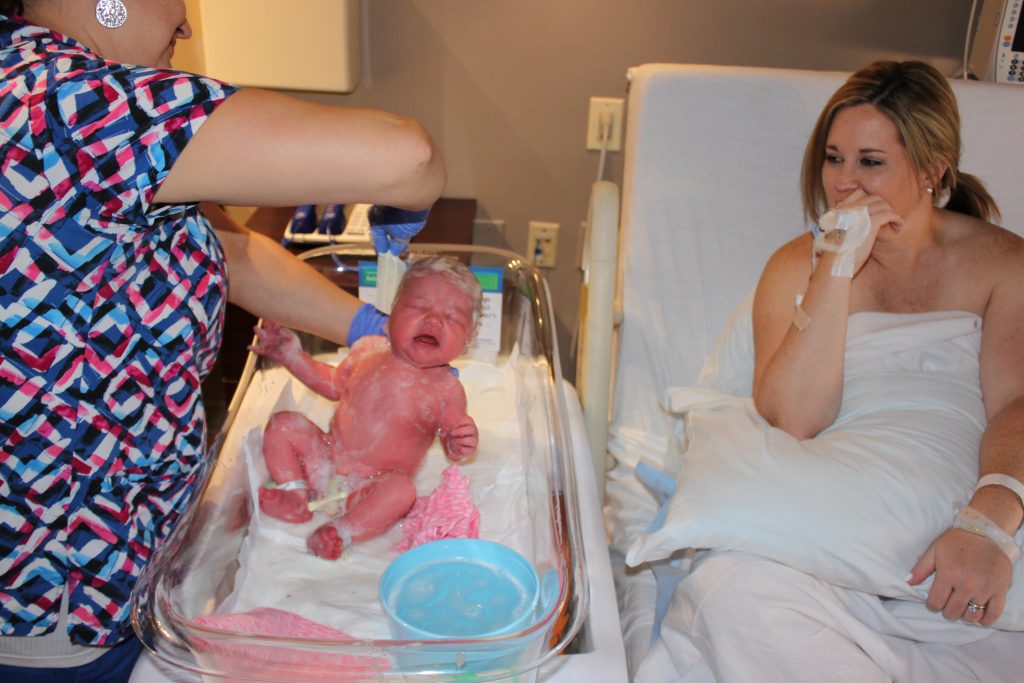 This picture brings up so many feelings.  Brielle’s first bath.  I was sitting there “monitoring” her (as many moms of new babies do), but also so much more relaxed than when I had my first.  I would have been crying that she was crying 6 years ago.  I also remember how much better it gets once you get home and have a few weeks under you.  Man, those first couple weeks are so hard (we’re on week 7 as this is posted). 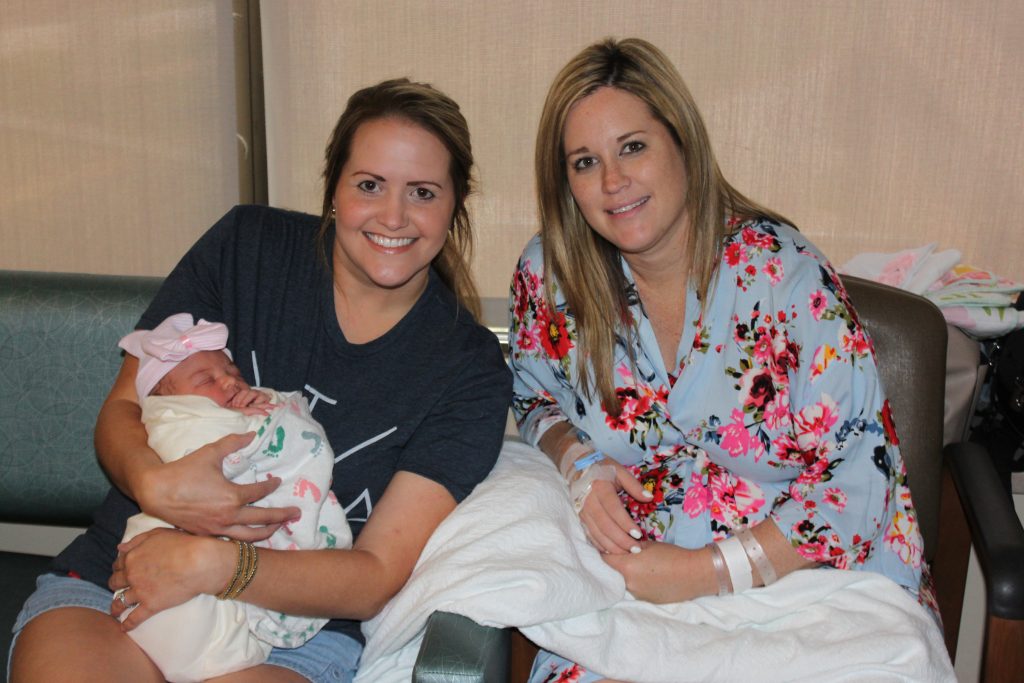 Meeting her Aunt Kerry (and Uncle Bubba…no pictured) – this is my sister in law, married to my brother. 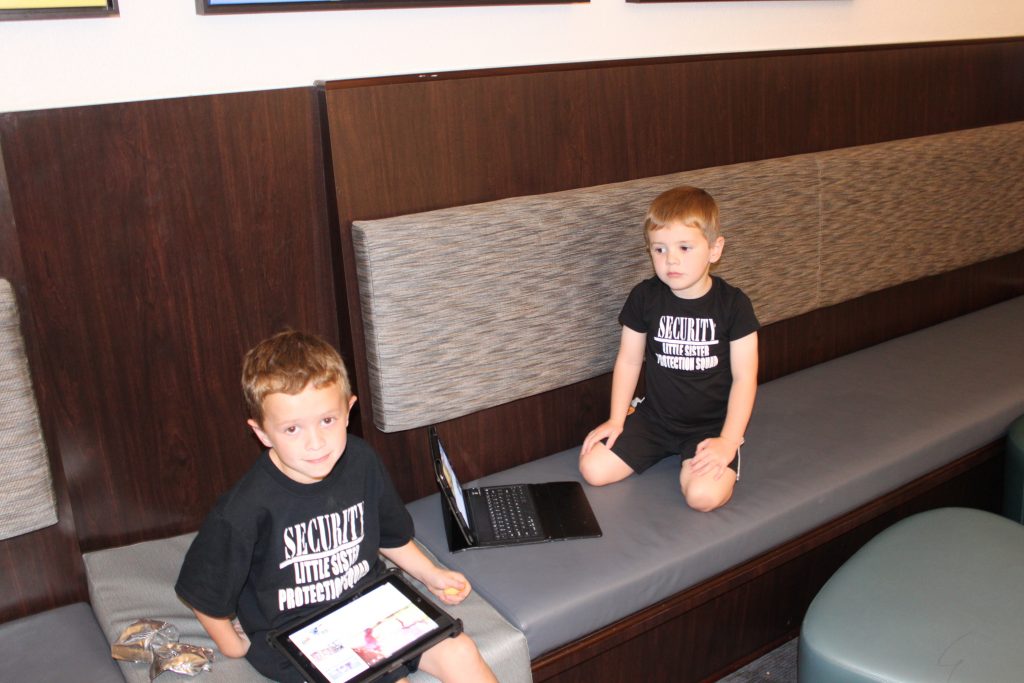 The boys waiting in the lobby to bring sister home. 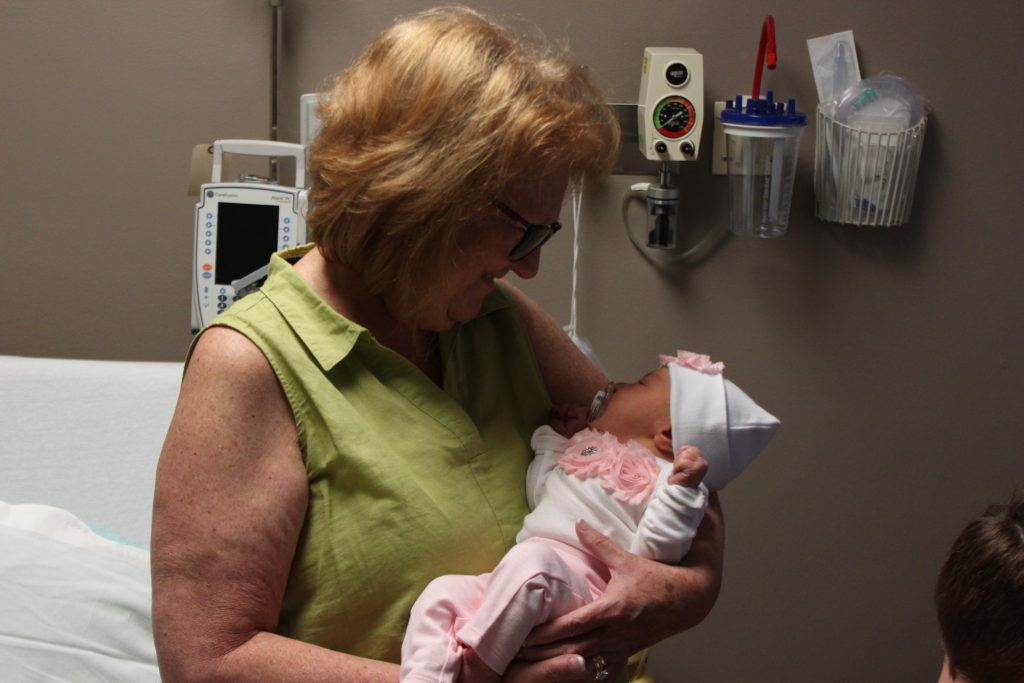 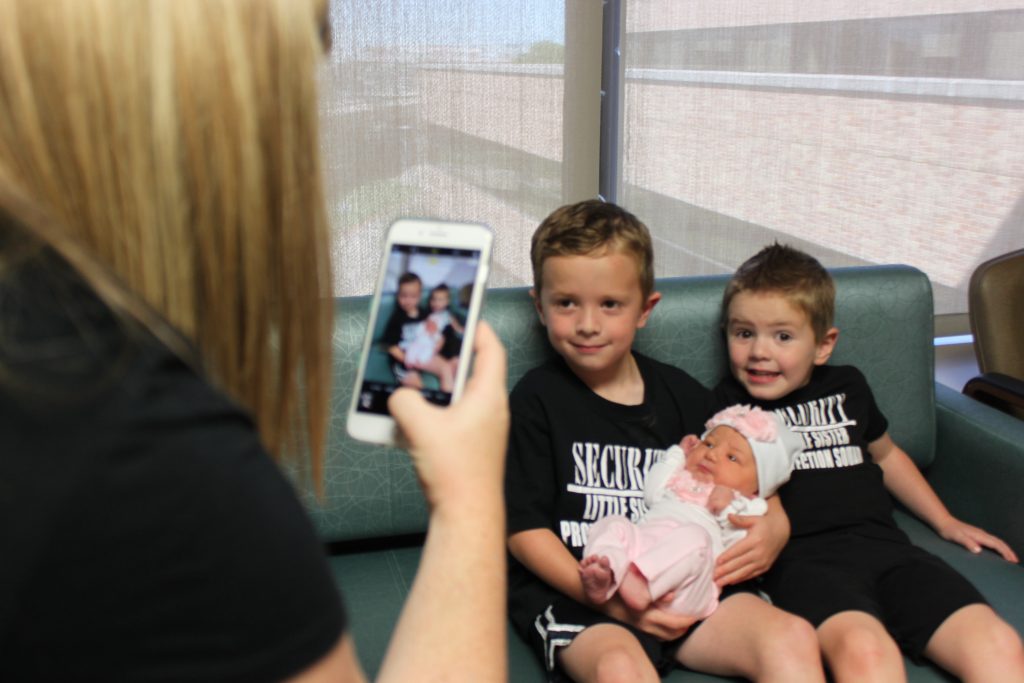 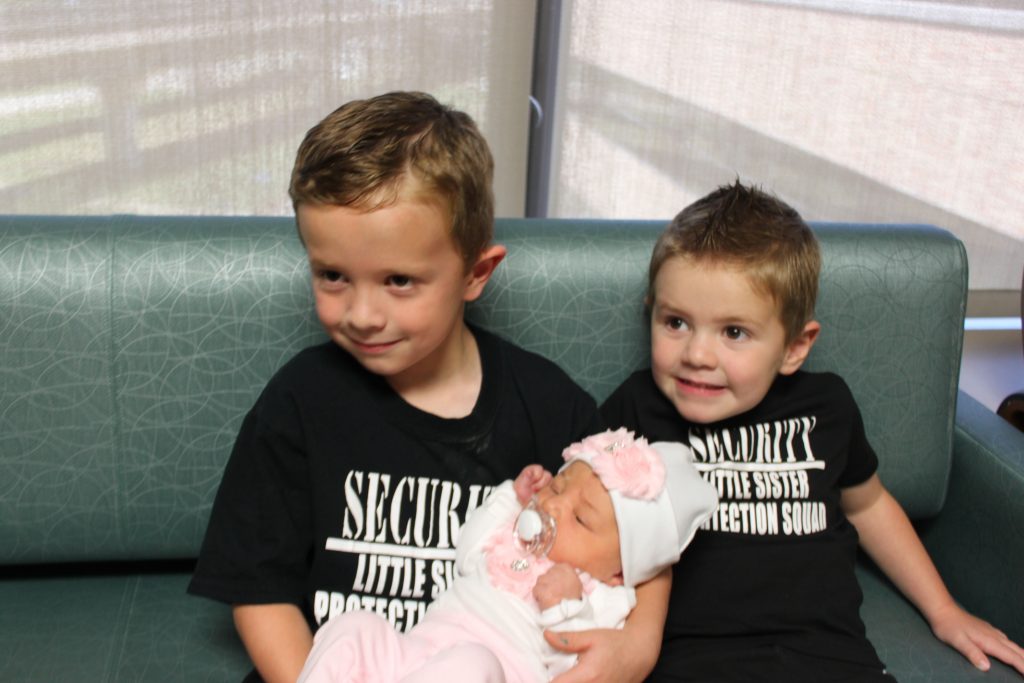 I feel so blessed that I have these 3 beautiful, healthy children that God has trusted me with here on Earth to raise.  I feel like I fail on a daily basis as a mother, but that’s exactly why I have to trust God and lean on him through motherhood.  It’s the only way.