Well, I’m officially progressing towards labor, according to my appointment yesterday.  I’ll keep this pretty short as I need to pack a hospital bag.  Ironically, I’m a bit more unprepared than previous pregnancies (probably due to having more duties with 2 kids and Ryan gone a lot since it’s reffing season).

So I had my 37 week appointment yesterday and the baby looked great!  She’s measuring above average (already over 7 pounds)…read below for details.  Last week I was checked to see if I had been dilating and was 1/2 cm.  Yesterday, they checked me again and I’m 3 cm dilated.  I was a little surprised.  Has anyone reading been 3 cm and gone a long time after that till birth?  She seemed pretty shocked at the progression from last week to this week, but with pregnancy, that still could mean a couple weeks.  Since I’m doing a VBAC again, it’s really good that my body is going into labor naturally as you can’t get induced with a vbac.  Therefore, if my body doesn’t go into labor naturally, I have to have another c-section, so I’ll take all the progression I can get!  I’m not quite ready though so I’m hoping I have at least another week.    Here is my 37 week picture (taken at 37 weeks 2 days): 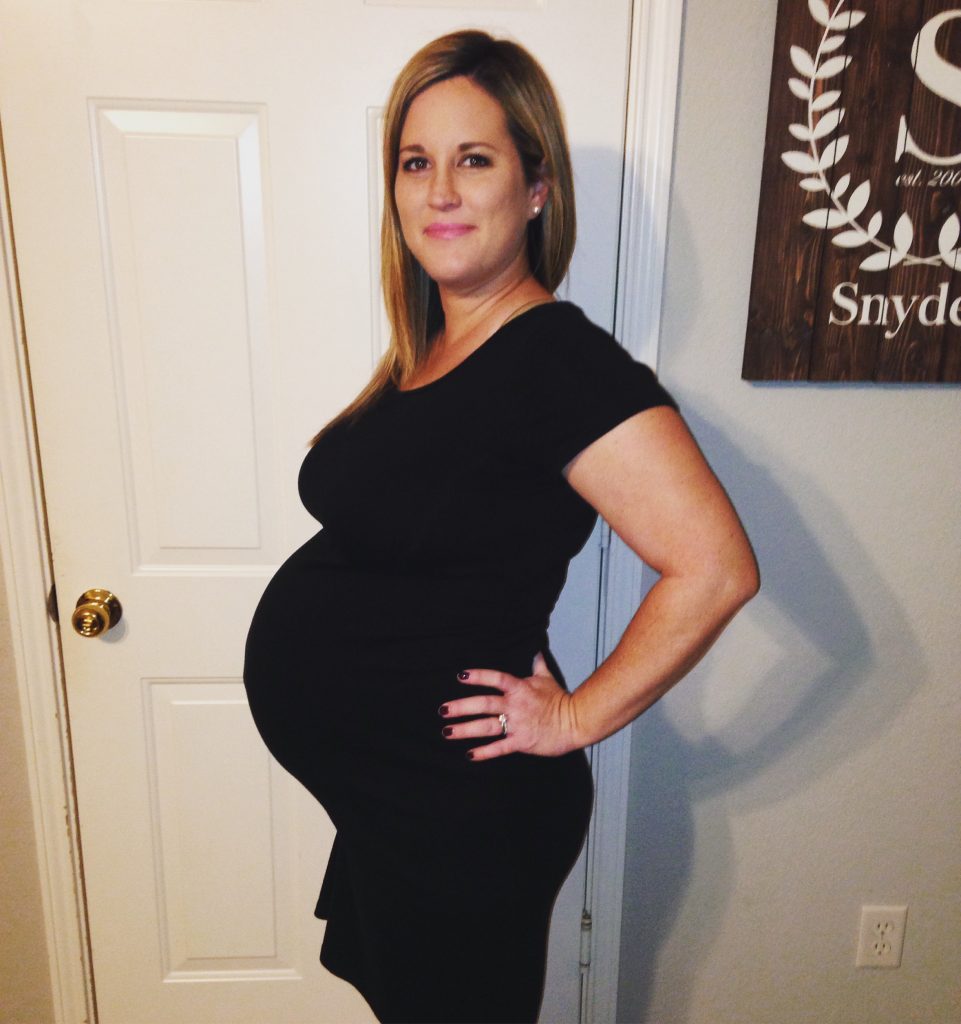 How far along?  37 weeks 4 days…(due date is October 7th)!
Total weight gain/loss?  30 pounds (I was weighed at appointment so this is official weight).  Side note: I gained 42 pounds with #1 and 36 pounds with #2, but I started heavier with this one.
How big is baby? Size of a Swiss chard (who comes up with these comparisons?). I had an ultrasound so she made official calculations and she is weighing close to 7.5 pounds.  She estimated her in the 68%! I guess I’m not getting my small baby ever.  She was almost spot on with my other two pregnancies with size so I’m assuming she’s pretty close (she does measure a bit higher though, so she says).
Stretch marks?   Same as before…I have some on lower back.  One thing I never got this pregnancy was that dark line that goes down the middle of your belly.  Has anyone else ever not gotten that?
Sleep? Probably one of the hardest things at this stage.  My shoulders/chest hurt pretty bad when I sleep.  I have to change positions often which isn’t easy.
Fitness? Nope, but like I’ve said before, I’m pretty sure I’ve had plenty of activity around the house.
Best moment this week?  Getting some of her stuff in the mail!  I got her hats I plan to put on her shortly after birth and they are so tiny and adorable.  I also loved seeing her on the sonogram…she had some big cheeks.
Miss anything?  I miss anything you can do normally, which is almost everything.  I can’t wait to bend down again and pick something off the floor.
Food cravings? Still craving soda (Diet Dr. Pepper to be exact).  And popsicles.  I’ve been eating those low sugar fruit popsicles at night.
Anything making you queasy or sick? No, but have had some bad heartburn.
Current Symptoms? My Braxton Hicks contractions have actually been fewer this last week (I’ve been drinking more water).  The swelling in my feet is probably the worst symptom I have as it inhibits me from doing stuff.  And have also been dilating as I mentioned above.

Belly button in or out?  Out
Wedding rings on or off?  On (can’t get them off).
Mood?  Nesting like crazy.  I’m in a little bit of panic mode and am trying to do everything so quickly.