Monday was quite the day and I figured I should document it so I can look back and laugh!  Monday started off normal with breakfast and playing.  This was the onesie I put Maddox in and posted it on Instagram with the caption “It’s a glorious job I tell you.”  Little did I know my sarcasm would play out… 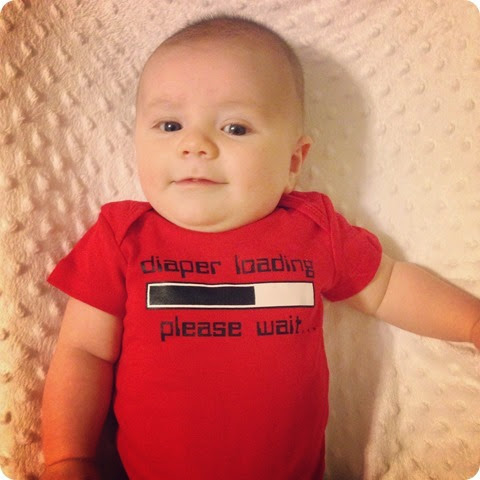 Maddox took a nap and once he woke up, we decided to get in the car and run a couple of errands.  We went to Hobby Lobby and Babies R Us.  Maddox napped as soon as we were leaving Hobby Lobby.  Got to Babies R Us and Beckham got out of cart to try on a costume.  He proceeded to run away from me but tripped on his escape…luckily, otherwise I’m sure I would have lost him.  But he hit his head on the tile and had a meltdown like someone was stabbing him with needles.  Needless to say, he woke Maddox up.

Maddox screamed the entire way home, almost chocking himself.  Have I mentioned this is the most frustrating and stressful time for me…a crying infant in a car.  Anyway, we get home, I warm up a bottle and start feeding Maddox.  Meanwhile, Beckham is eating a muffin at the bar before he heads to take his nap.

Next, I hear, “mommy help!”  I turn around and  Beckham’s head is stuck in between the chair.  At first I’m like, “Okay wait one minute until I’m done feeding Maddox.”  Then I realize he really is stuck and poor guy is trying hard to pull back out.  His ears were red and he’s starting to get really scared.  He wanted Buppy (his bunny).  Yes, like any good mom, I grabbed my camera and snapped a pic! 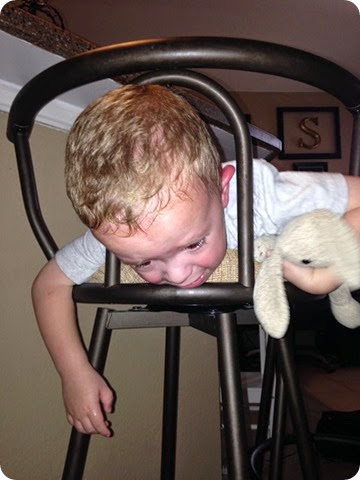 Right then I’m thinking if he got through, he should be able to get back through.  Problem is I couldn’t figure out what angle he used to get through the chair.  Meanwhile, Maddox was sitting in the recliner chair just chilling thank goodness (he’s only eaten half his bottle).  I try helping him push his head…nope!  I rub some oil on his head and ears and try that…nope.  Finally, I am realizing I’m going to have to call the fire department to come get him out.  I call Ryan, but knew he wouldn’t answer since he was in class. 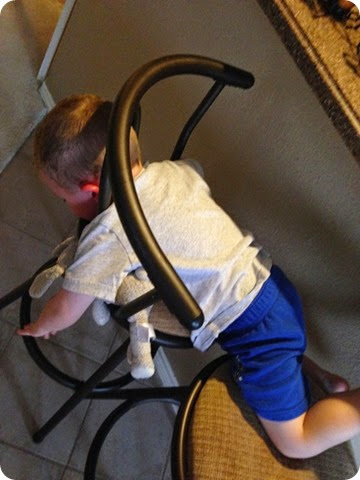 I was so embarrassed and decided to call my friend Michelle (teacher friend who is working at this time) who lives very close and her husband is a fire fighter in Dallas.  I was hoping he was off duty and could walk me through how to get him out (he was at home with their youngest son who was napping).  Michelle calls him and ends up coming home to relieve him so he can come help me…seriously the nicest people ever and I was feeling even worse now.

I try and calm B, telling him a fire fighter is coming over.  It seems to help and he’s now excited to have “my friend” come help.  I tried a few more times to get him out and he yelled at me, “No mommy’s friend help.”  About 1 minutes before Dan (firefighter) gets there, I realize the top portion of the chair is screwed into the seat and I could probably just unscrew it.  He gets there and sure enough, my idiot self could have saved a lot of time and heartache if I had just unscrewed it.  But we let the firefighter do it and Beckham had a new best friend.  I’m still in awe of how nice and selfless my friends are.

Beckham naps.  Maddox goes down about 30 minutes later.  Finally I have about an hour to get some things done.  I managed to clean the kitchen and make our bed when I hear a weird sound coming from Maddox’s monitor.  I go into his room and he is gagging!!!!  I pick him up and he’s having a hard time breathing.  I’m starting to get real scared and realize, yet again, I might have to call 911.  15 seconds later he projectile vomits ALL OVER ME!  And the carpet and himself.  So into the bath we go.  Not me…I just get to stay covered in sour milk!

He continues to have this gag reflux the rest of the day.  He’s been drooling a lot lately so I thought maybe he was choking on his spit.  His breathing was mucus-y too, but no sighs of a cold.  We had planned to go on a date this night so Ryan’s mom came over to watch boys.  I felt so bad for her as she was getting the boys after a dramatic day and at the witching hour.  She’s a nurse so I felt okay leaving M the way he was, but still it’s your baby.  We were about to leave when we went to grab our gift card and couldn’t find it.  Really?! Of course we bicker about who lost it or put it somewhere.  I swear I didn’t touch it, but I’m sure it was me but my mind is completely mush these days.  We ended up finding it probably 15-20 minutes later in the cabinet.  Neither one of us remembers putting it up there.  Oh well, we have it, let’s go.

The dinner was actually GREAT and our night ended on a high note.  We went to Pappas Steakhouse in Dallas.  It’s by far one of the top 3 steaks in Dallas!

We came home and did baths, feedings, bedtimes, etc.  Maddox slept with us that night next to our bed.  He did wake once with the gagging/choking so I took him to the doc yesterday to figure out what was going on.

Ended up he has an upper respiratory infection.  Since you can’t give them any antibiotics, it just has to takes it’s course.  Poor thing!  He was gagging and throwing up the mucus from the infection.  There is nothing worse than when your kid is sick.  Especially at 3 months old…it’s super scary!  And we also were told we need to take him to the craniologist to get his head looked at for a helmet.  I knew it was super flat in the back but I was hoping that it would round out now that he’s up more.  He HORRIBLE at tummy time and his neck support isn’t great either.  See how is head is taller in the back…that is the main issue.  We’ll see what the specialist has to say, but his doctor said he’d be surprised if they didn’t recommend a helmet to fix it. 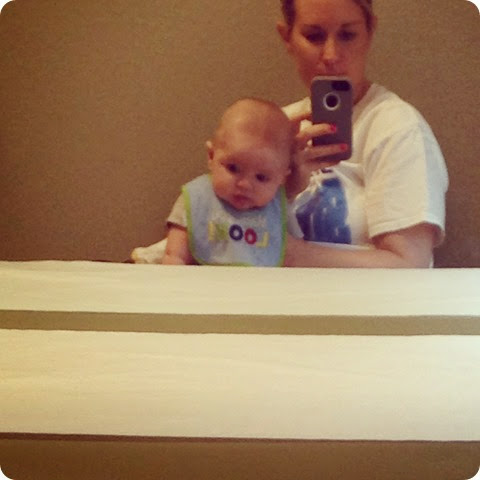 Oh my dear Maddox, you are one high maintenance baby!  But so worth it.  I’m sure glad those days are behind me.  Pray Maddox gets over this quickly!  I’ve never had a sick baby before…B didn’t get sick until way after a year old.

Oh and to top it all off, I got another breast infection.  My third one since having him, fourth one including the one I got during pregnancy.  Problems you get with an oversupply of milk.  Here’s to a better day…

(Visited 151 times, 1 visits today)
Our Weekend and a Fall Printable for You!
Friday Favorites