Monday’s Money Saving Tip: How To Work Cable Into Your Budget? 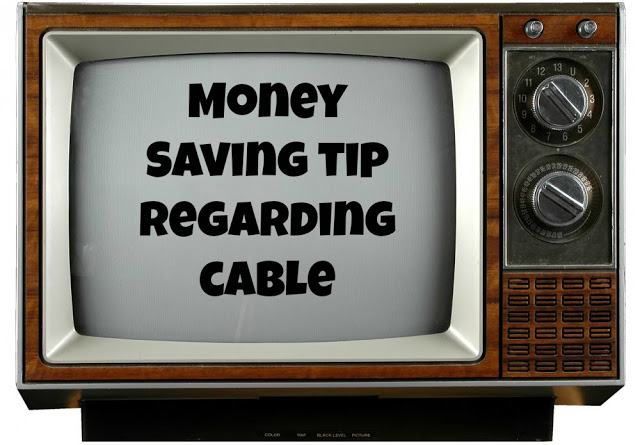 Yes, I realize it’s Thursday morning, but I really wanted to get a MST posted this week, so better late than never.

I’ve been trying to think of a good tip to share with you guys that saved us money when we were paying off debt (and still does today without debt).  I remembered how much money we saved compared to others when it came to cable.  I remember (and still do) talking to my friends about their cable bills:  Holy Canoly…I cannot believe people voluntarily spend $75+ per month on cable/entertainment through the television.

My tip for you regarding cable if you are paying off any type of debt:  DON’T GET IT.  I’m going to be honest with you!  If you have debt and are looking for ways to cut your budget, then having a cable bill with anything over basic cable is basically an inefficient means of reducing debt or saving money.  Cable is a luxury item that has been turned into a necessity in our culture.

I never had cable growing up and really didn’t know any different.  My parents, ironically, only got cable once we were out of the house (Thank you mom and dad for not having cable…I’m afraid I would have grown up thinking cable was T.V.).  Plus, we had no gaming systems through the T.V. either.  Just good ole Super Nintendo, which we rarely played because we were ACTIVELY playing outside or being CREATIVE and making up games.  Can you tell how much I’m against excessive video games?  Let me just add that as an elementary teacher, you DO NOT want your kids playing video games/watching T.V. everyday/all day.  Take my word for it, at least in my experience.  Not to mention the violent ones are just plain awful!
*Nothing wrong with video games, but it should definitely be monitored in my opinion.  Same goes for watching T.V. too.  There’s been so many studies that prove the cons outweigh the benefits of t.v.

Even when the “converter box” deal came about, we just had rabbit ears since we already had High Def.

Did we ever get cable?  Yes, we eventually did (a year ago September), but have the basic channels (lowest level you can get).  We only got it because they were running a special for $10 a month for 12 months.  Our Internet is through the same company so they discounted our Internet if we bundled, making it $45 for BOTH cable and Internet.  Just recently that deal ended and is now $25 for cable and $45 for Internet.  So we’re actually debating keeping cable.  We rarely watch TV.

We do not have a DVR either, so if there is a show we want to watch and miss it (which is almost always), than we watch it later on Hulu.  If Hulu does not have that show (there are some shows they won’t play…Criminal Minds for example), than we wait all year and buy the DVD series on sale or ask for it for Christmas.  My husband and I will have Criminal Minds (or Grey’s Anatomy..thank you Ryan for watching it with me) marathons in the summer.  No commercials either.  It’s a lot of fun!

Patience is a virtue!  Good things come to those that wait. If you’re trying to save money, WAIT to get cable until you can afford it.

Hope this helps and let me know if there is anything specifically you would like me to post about.