What a week!!!  I’ll start this week out with my 17 week picture.  Baby Snydes, are you in there?  I still am told by most people I don’t even look pregnant still.  The only people that can really tell are myself, Ryan, and my family.  I’ve looked at a lot of people similar in my build and they looked the same at this point.  No worries…I’ll be big soon enough!  Man, I feel so big already. 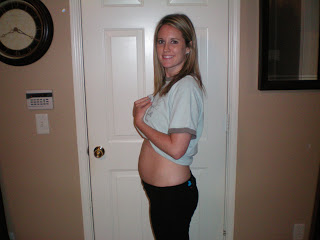 Well, this was a pivotal week for me.  Most of my symptoms are still the same: A million trips to the bathroom (but I drink more water too), “beauty marks” on my face :(, still tired, random, mild cramping (so many things happening and shifting inside).  I did experience 3 newer ones!
I have discovered one thing about myself throughout this pregnancy – I have a low pain tolerance!  I feel that I am very in tune with my body physically. I’m very aware of any new physical feelings.  I always thought this in college with injuries, but it is confirmed.  I was never severely injured in soccer and I think it was because of my low pain tolerance.  Before anything could happen, I was out with the simple injury (only ankle sprains and strained knee ligaments).  That’s pretty rare with the level and amount of soccer I played.  So this will be an interesting 5 months ahead.
ROUND LIGAMENT PAIN:
I experienced a new “cramp” in my lower stomach this week.  It’s a sharp jolt that lasts literally a second.  Sometimes I get 5 in a row and sometimes just one.  They are sporadic so I’m not worried.  I read in the pregnancy books that the doctor recommends, that the pain is round ligament pain, which is basically the round ligaments around my uterus stretching and thickening as my uterus grows.  It’s a pretty sharp pain, but very bearable because it’s so quick.  Sometimes the RLP is duller, but usually subsides with lots of water.  I’m trying to stay more hydrated with this summer heat, but it’s killing me with my trips to the bathroom.  Feels like I have a very FULL bladder when I’ve just gone 30 minutes before.  I thought that kind of subsided until the 3rd trimester, but I guess not.
LOSS OF APPETITE:
If you know me at all, you know I LOVE to eat and cook!  I’m still eating, don’t worry, but I don’t really get hungry.  I just eat to eat.  I wake up really thirsty and then can eat later on.  Then comes lunch.  But when dinner gets here, I’m really talking the food up!  I still don’t like cooking the meals, especially chicken.  I have two meals I’m going to cook this week so we’ll see.  I have Cajun chicken pasta (Ryan will grill the chicken) and a pot roast (hahaha…no cooking, just prep).  It doesn’t help that it’s summer and I wake up late and the heat can zap hunger.  I didn’t gain any weight last week, but feel I’m at a good weight NOW.
BABY SNYDES IS IN THERE:
People kept telling me I would feel the baby soon, but I thought it would be closer to 20 weeks since I was pretty small still and I don’t have many symptoms.  Well OH MY GOSH, I felt the baby move!!!  It was crazy!  The first time I felt it I was laying on my parent’s couch and felt a “popping” sensation in my lower stomach.  I wasn’t really sure if that is what it was.  I felt it again, but more of a gas feeling (sorry) when I was laying down in bed reading.  I felt it again the next morning and that’s when I told my mom, “I think I’m feeling the baby move.”  Finally, on Monday I felt the movement again in the morning when I was sitting on the computer.  I just sat there and smiled because I knew I had been feeling the baby!  It’s definitely a feeling I have to be sitting or laying still for.  If I was moving around, I don’t think I could feel it at this stage.  I can’t wait for Ryan to be able to feel him/her soon!  When I was on the computer and felt the baby, I wanted to capture the moment in words so here are my thoughts right then:
“This is the coolest thing ever!  I sure hope it’s what I think it is!  I thought I felt the baby yesterday and the day before similar to a piece of popcorn popping in your stomach (if you can imagine that).  People describe it as butterflies in your stomach, popcorn popping, or gas bubbles (and call it “quickening”).  I don’t really feel the butterfly description, but definitely the other two.  Today is a little “harder.”  I’m sitting here on my computer and keep feeling a gas/popcorn/thump feeling in my lower stomach, more so on the left side.  I told myself I’d be more sure if I could feel more later in the week or weeks to come.  I’m now convinced that is what it was.  I personally think it is God answering my prayers.  Yesterday and the day before, I was tested with worry (read previous post) and had abdominal pains in my lower middle/left side – the best way I can describe this pain is if someone took a fishing hook and hooked it into your skin and pulled every now and then on it, except like the hook is hooked into my uterus.  It’s definitely bearable (only because it lasts a second), but annoying and worrisome.  I told myself it was my uterus stretching and growing.  I prayed I would stop worrying and I believe God just told me “Hey here’s your baby moving…everything is ok!”  Being a first time mom-to-be is crazy with learning so much about how your body works when it’s building a baby!  Wooo…there it is on the other side!”  J
God is in control and He is making me so happy!