A major part of 2014 was being pregnant and delivering Maddox.  Half of the year, I’ve had a rapidly growing baby inside me.  The other half, I’ve been caring for that rapidly growing baby.  He’s now almost 20 pounds, full of rolls and smiles.  He was a tough baby, but slowly growing out of that.  Here’s a little recap of my pregnancy.  Two things are for certain: I might be the world’s worst sweller during pregnancy (these were the flattering pics) and I grow some LARGE babies!  I love being pregnant, but I’m happy to have this behind me. 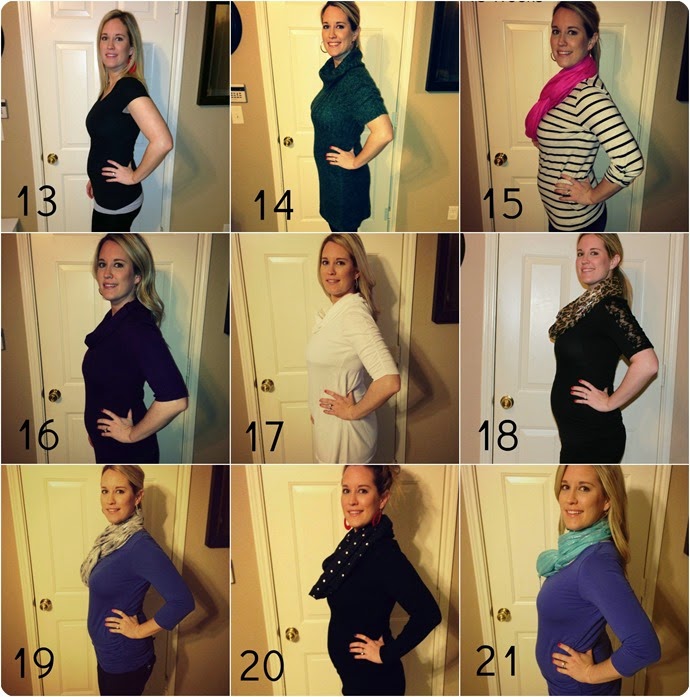 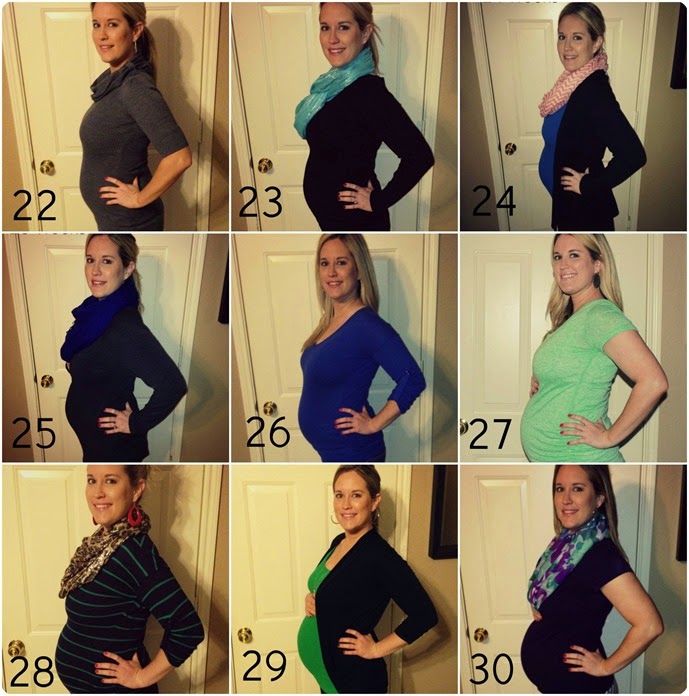 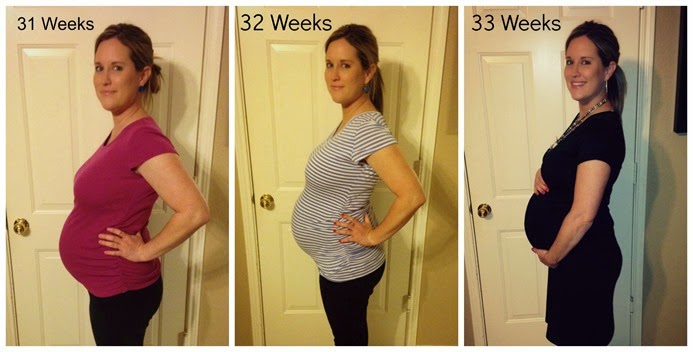 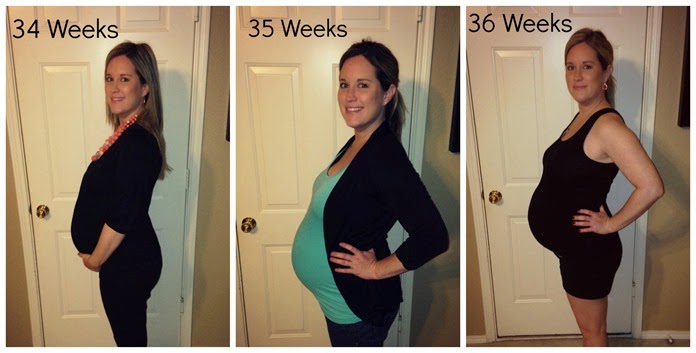 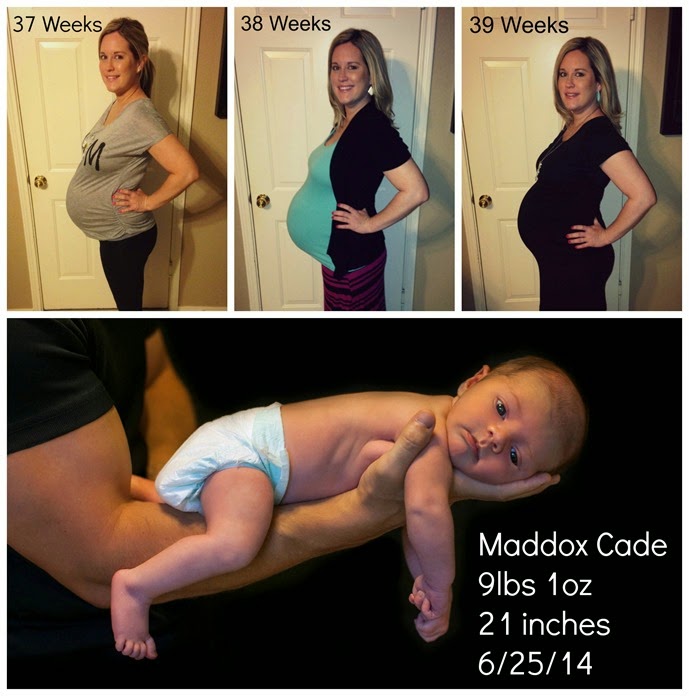 {JANUARY}
We started the year off with a bang…literally.  Beckham fell off Ryan’s back onto the carpet on New Year’s Eve, so many of this month’s photos include a black eye.  Beckham was barely 2 years old.  I just had announced my pregnancy with #2.  I shared a Day in my Life.  I truly miss this time…it seemed crazy at the time with one kid and one on the way…I just laugh at that now.  I set some goals/projects to be done (more on that later).  I gave B his first hair cut. I met one of my best friends, Kristen’s, twins. 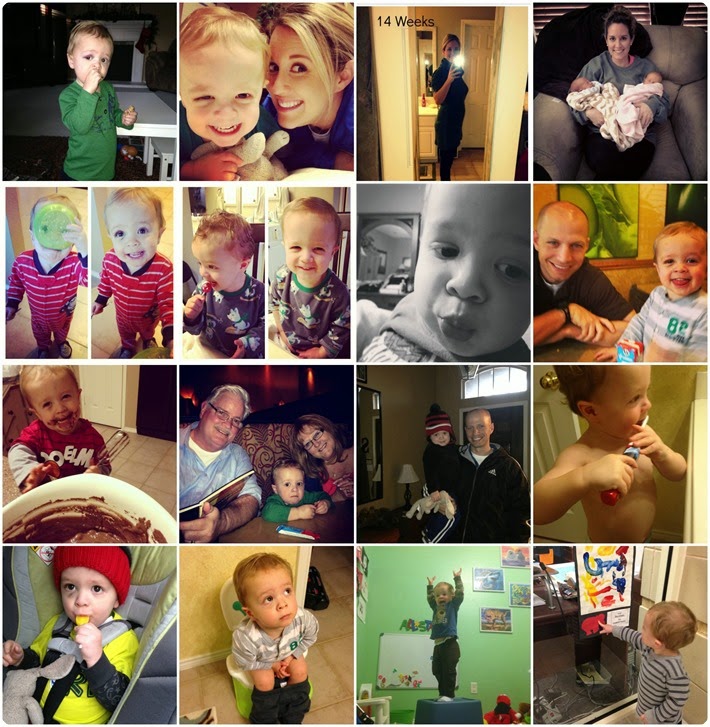 {FEBRUARY}
This month was filled with play dates and more hanging out with B!  Beckham started crawling out of his crib, although he ended up not doing it often.  I chopped 6 inches off of my hair.  I turned 29 on the 16th.  We also found out if Baby # 2 was a BOY or GIRL at 20 weeks! 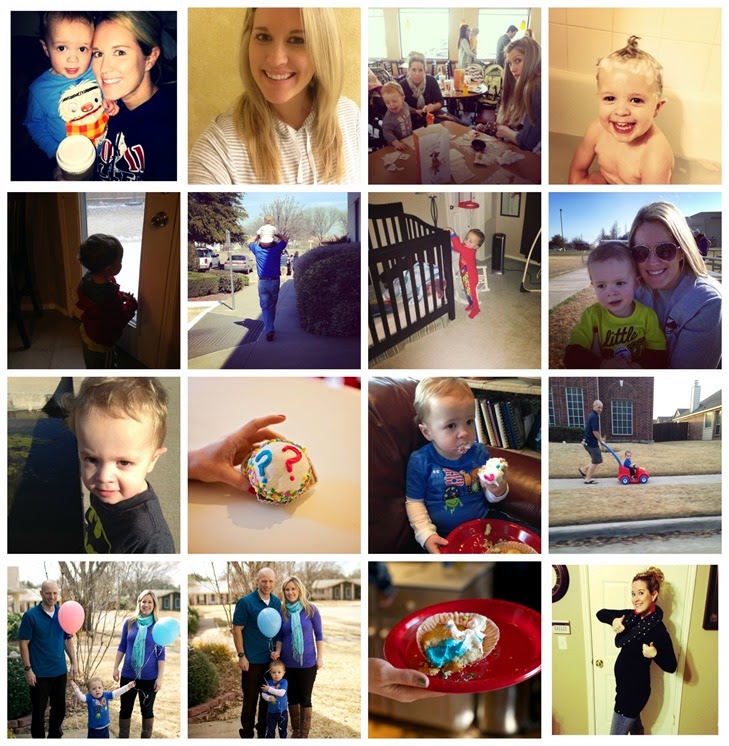 {MARCH}
March was busy.  I celebrated a college friend’s baby shower.  Beckham got his first professional hair cut.  He got really sick with croup and then later an ear infection.  We had a great Spring Break.  We celebrated my grandmother’s birthday and our friend Harper’s 2nd birthday.  The weather got nicer towards the end of the month, so we were able to get outside a bit. 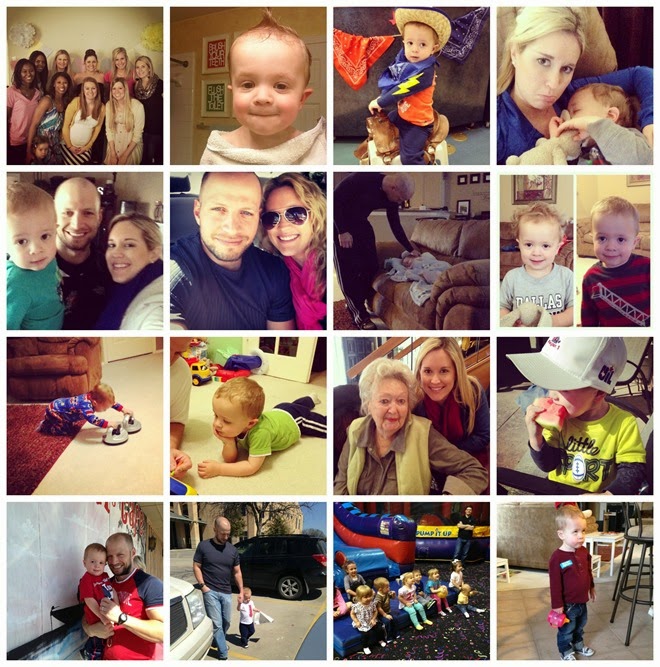 {APRIL}
I started to slow down in April a bit the bigger I got.  We did a lot of “normal” stuff like school, play dates, errands, etc.  A tornado hit Dallas in April as we played in the rain minutes before we got a warning on our phone.  We celebrated Easter. 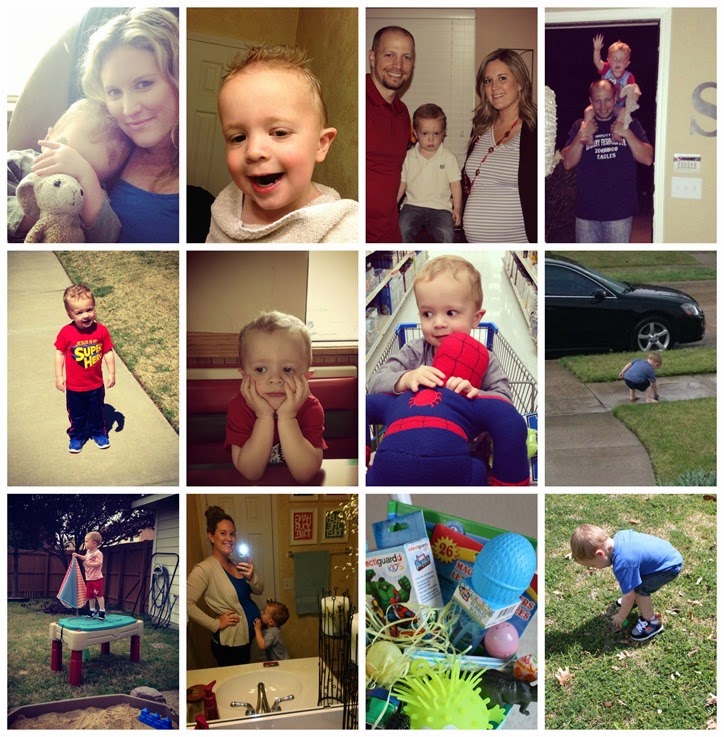 {MAY}
May is naturally a busy month with Ryan’s birthday, Mother’s Day, and the end of his pre-school for the year.  We enjoyed each of those celebrations as well as meeting the cow at Chick-cil-a (this is huge for him), hanging with some friends, and making our guest room into a nursery.  I developed mastitis this month, which I’ll never forget…I was putting up decals when I started feeling like I had the flu.  Beckham turned 2.5 as well. 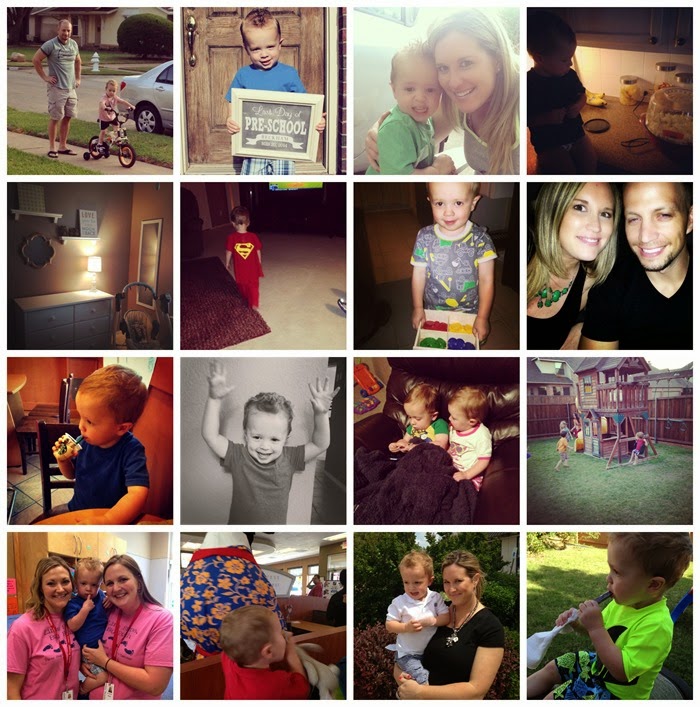 {JUNE}
Well, June was crazy and extremely tiring!  It started off with a wedding where I got to see tons of my old soccer buddies.  We also had two baby showers, lots of hanging out with Beckham and savoring our time.  Ryan was a  huge help and really took over any duties with Beckham…I was beyond exhausted carrying around an enormous baby and swelling that could fill every oompa loompa put together.  We spent all month tossing around different names for the baby…we still took almost 2 days to name Maddox.  Our month ended by welcoming a precious baby boy into our family!  I’m so thankful for a healthy baby and healthy, albeit LONG, delivery.   Life’s been crazy ever since. 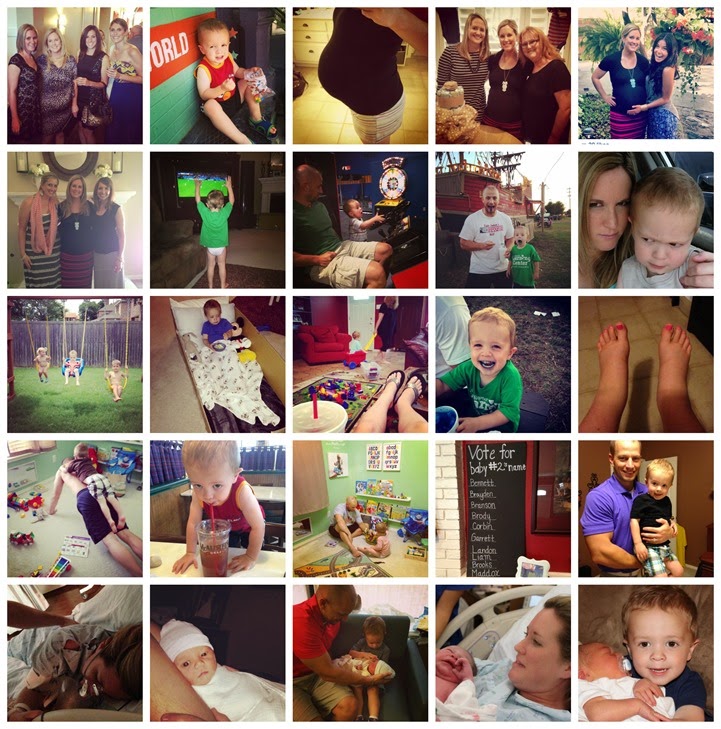 {JULY}
July was filled with learning how to survive with 2 kids and no sleep.  Luckily, I’m blessed with family who took Beckham SO many different days and nights so I could have time with just Maddox.  I’m not gonna lie, this month was rough.  Maddox was not an easy baby (up until almost 6 months), but this time seems like forever ago!  We watched a lot of TV, including the World Cup. 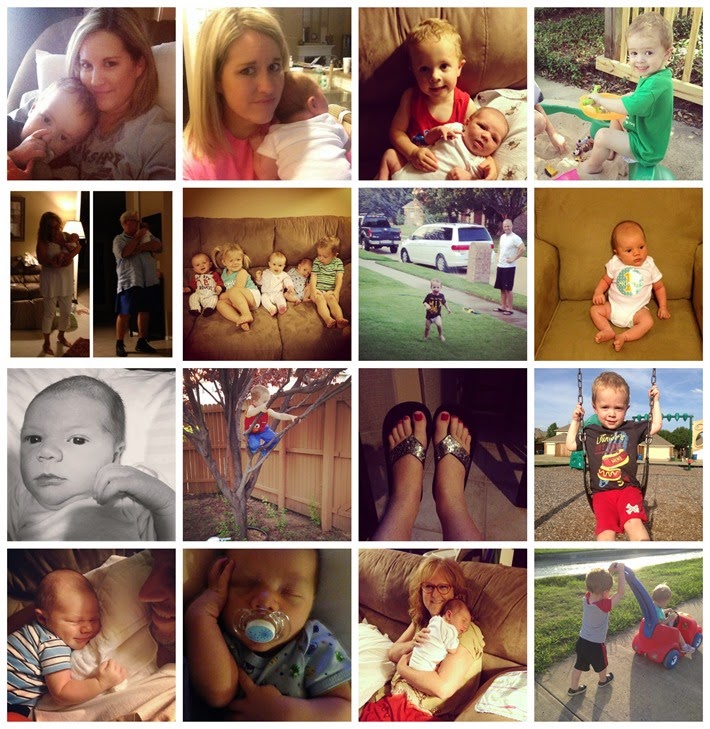 {AUGUST}
August is when I got out more.  I lived in pj’s and spit up at home though.  I had a girls night out.  We had a couple of play dates.  We went to church for the first time around 7 weeks.  Ryan and I celebrated 7 years married together!  We went out to eat for the first time.  We swam a lot at my parents house.  I cleaned and organized Ryan’s classroom with my mom.  Maddox smiled for the first time.  It was a busy month. 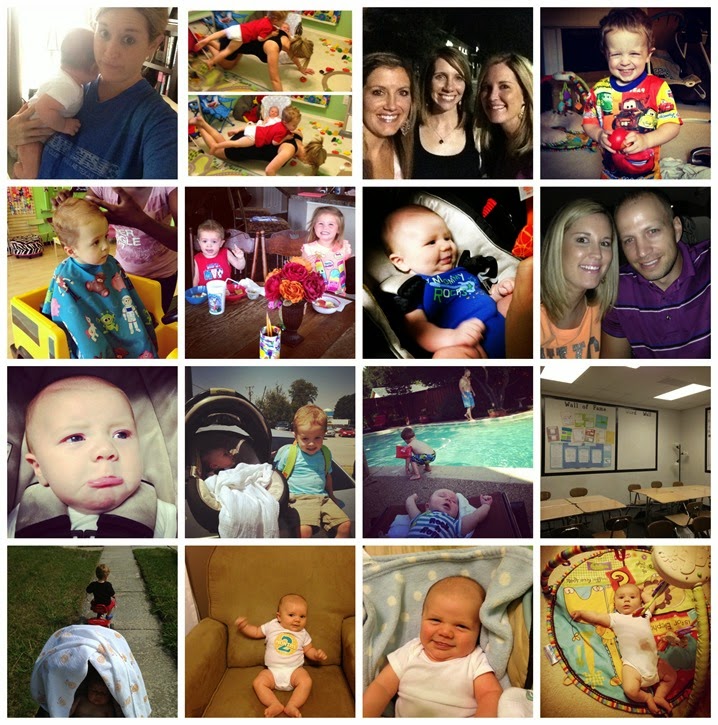 {SEPTEMBER}
Beckham started pre-school in the 2 year old class.  Ryan and Beckham started a tradition of getting donuts on the way to church every Sunday, since I was home with Maddox a lot.  We all do this now.  Maddox was pretty tough this month and he also got sick for the first time (Beckham didn’t get sick until after 1 years old, Maddox has already been sick twice before 6 months).  We visited the Famers Market and B rode a pony.  Beckham wrote all over himself with a dry erase marker.  This is funny to me as my little brother and I did this to each other, but we were covered from head to toe (and tongue) with purple Sharpie.  Beckham got stuck in the chair and I had to call my friend whose husband is a firefighter to come help me.   I also did a Day in my Life as a mom with a newborn. 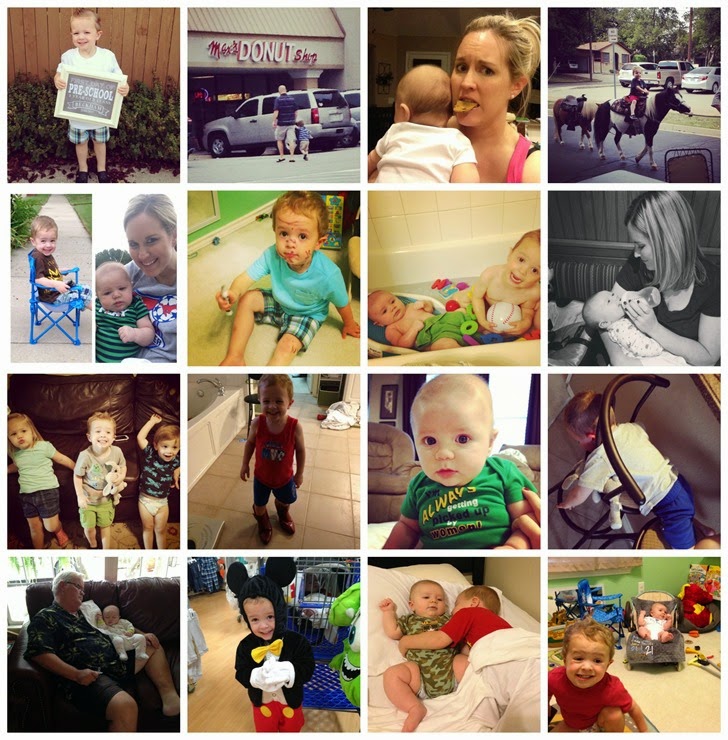 {OCTOBER}
I didn’t realize how busy October was until I went through the pictures.  Through all the fun we had, it was chaotic at our house…Ryan started basketball games so I was figuring out how to manage 2 kids by myself (I still am).  I concocted one of my favorite drinks, Starbucks Caramel Macchiato.  Our church moved facilities while we build somewhere else.  We “watched” the Cowboys at our friends house (we used to watch almost every game with each other before kids…now we get together every so often and pretty much “watch” kids while the game is on).  Maddox started wearing his helmet, officially called a Doc band.  I sold some signs at my high school’s Fall festival.  We had movie night outside at the park.  We visited the Texas state fair.  We went to a couple of pumpkin patches and rode a hayride.  We went to one of Beckham’s best buddies’ Superhero birthday party. We carved a pumpkin for the first time.  We went trick or treating as a football player (M) and Sully from Monsters Inc. (B). 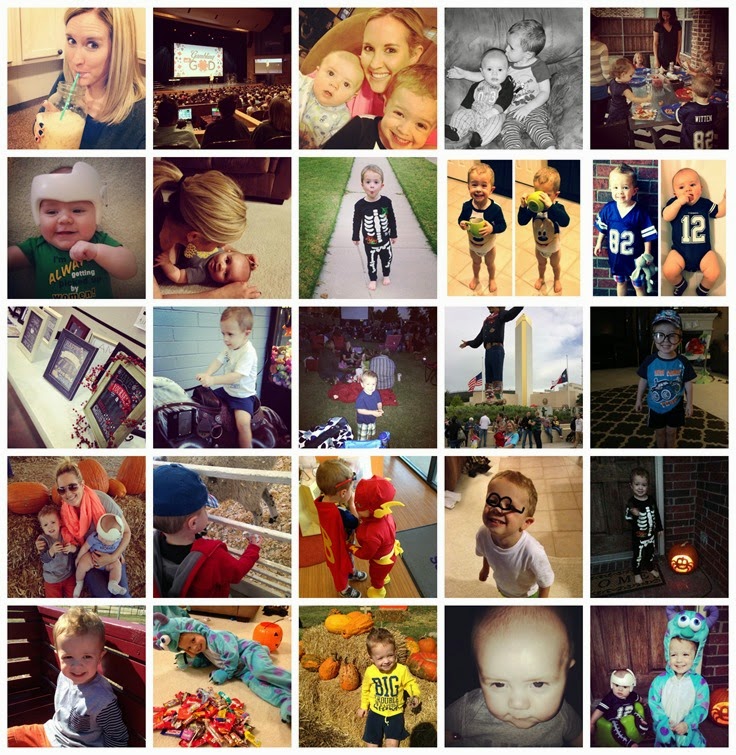 {NOVEMBER}
My niece, Tenley, turned 2!  Beckham and her our really close.  Maddox was dedicated at church!  Beckham turned 3 years old!  We took family photos.  Bekcham had a party for Thanksgiving at school.  My sister came in town to celebrate Thanksgiving with us!  My mom and I decorated for Christmas at the end of November.  Elf (elf on the shelf) came to the Snyder house for the first time on November 30. 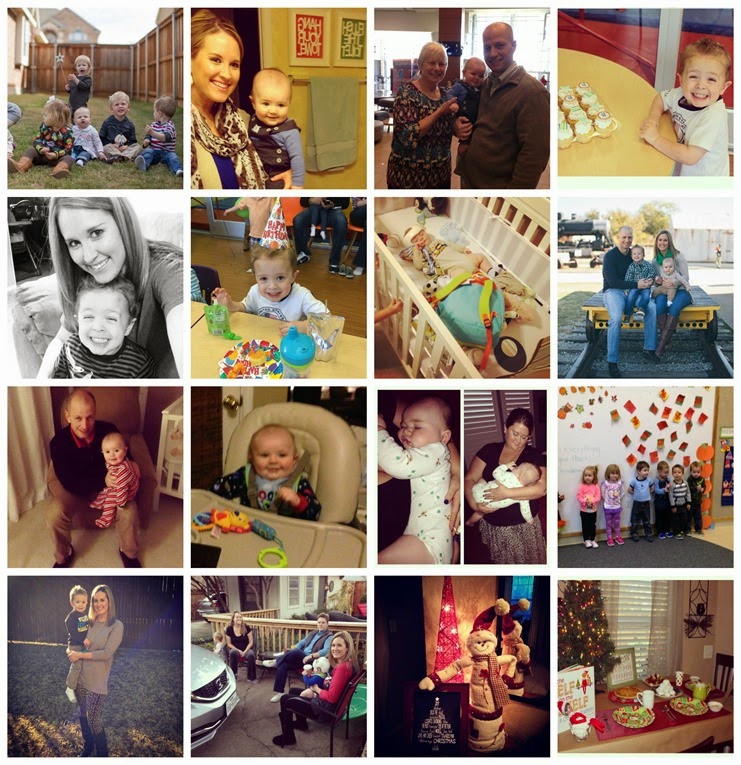 {DECEMBER}
December was crazy as it is with most people.  Maddox went in the church nursery for the first time.  We visited Santa, both in the mall and at Walmart (I think he preferred the Walmart one because he sang to him).  Beckham had his first program and it was adorable.  Maddox got his helmet OFF and started sitting up!  Huge milestones.  We built a gingerbread house for the first time.  We went on a limo ride to look at Christmas lights with my parents, who celebrated 40 years of marriage that same night.  We visited Ryan’s PawPaw for his 92nd birthday.  We celebrated lots of different Christmases and unfortunately ended the year with 2 sick kiddos.  We also hit potty training hard and have been successful so far (at least with pee).  We stayed home on NYE and had dinner with my parents.  Sick kiddos kept us in, but that’s how I like it anyway. 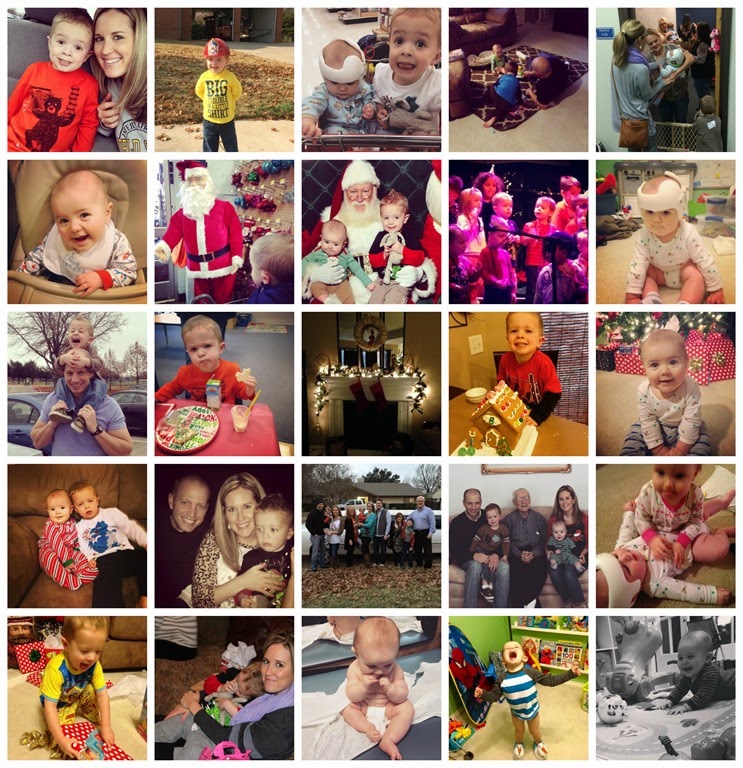 If I had to sum up this year in one word, it would be BLESSED.  But don’t you worry, I’m super tired and stressed too.  I’m EXTREMELY excited about 2015 and how much fun I know it will be now that Maddox is out of that newborn stage and developing a schedule.  I’m excited to see my boys play together.  I’m hopeful I’ll wake up earlier than both of them to enjoy God’s word, a cup of coffee, and silence before tackling my job as mommy to some energetic boys!  I plan to get more than 4 or 5 hours of sleep a night.  I have big dreams for my business and pray I live FOR Christ more and exemplify Jesus here on Earth better than I have, especially as a mom and wife.

Thank you for supporting me in 2014 through this blog and encouraging me this year!  I truly love hearing from people and love the connections it has brought me!