This post will probably contain a little TMI, so there’s your warning. 🙂 This was NOT a good week for me!  It’s safe to say I’m pretty miserable at this point.  And I would not be surprised one bit if he made his debut ANY DAY now.  I cannot imagine going 5 more weeks like this.  Many more contractions this week.  Heart burn was REALLY bad the last 2 days.  Always have the urge to pee.  I’ve been tired a lot, but now it’s a sleepy tired.  CONSTANTLY thirsty!  Uncomfortable in 95% of positions.  My shoulders hurt so bad when I wake up…I turned around to give B a granola bar in the car yesterday and thought my shoulder was going to slip out of socket…they’re so sore from sleeping on them. 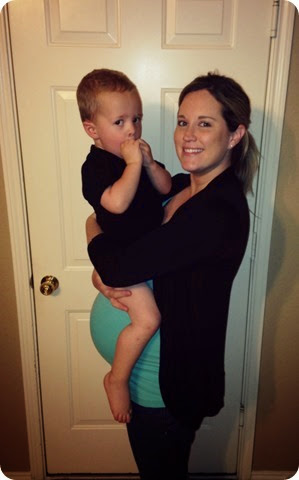 I have two new symptoms this week.  First one is back pain.  Not like a sore back from carrying a load in front, but sharp pain in my lower back across from side to side.  Luckily, it’s infrequent, but when it hits, it really hurts.  I don’t remember this with B.  It doesn’t seem to come with a contraction, so I think it’s just the way I move sometimes.
Second one was very surprising and I did not think pregnant women could get this.  This is the TMI bit, so…  Did you know you can get mastitis when your PREGNANT?  Yep, breast infection before I even start breastfeeding.  Awesome.  I didn’t even get it when I was breastfeeding Beckham and I had an enormous supply and bf for a year.  I’ve been lactating since 26 weeks during this pregnancy, so technically my milk ducts have been “open” since then, according to my doc.  Whenever your milk ducts are open, you can get an infection.  On Wednesday, my mom came over to help me a bit and take B for a couple nights (more on that later).  I kept telling her my left breast was REALLY sore, but maybe that is just what “tender breasts” feel like???  Once she left that afternoon with Beckham, I laid down on the couch because I wasn’t feeling too good and woke up to flu like symptoms.  My body ached all over and I had no appetite. That’s when I noticed my breast was red where it hurt.  If you know me well, you know it takes me forever to finally go to the doctor.  So I told myself it it felt the same the next morning, I’d call my OB.  I woke up the next morning at 10:30…yep!  I still wasn’t feeling good and it was still tender.  I called my doctor, but wasn’t able to talk to him voice to voice until later that night when he told me it was indeed an infection and prescribed me some antibiotics.  The next day, I felt SO much better.  Unfortunately, the two days my mom took B off my hands so I could do stuff, I was pretty ill.  But fortunately, I didn’t have B to take care of either.   So, if you’re pregnant and have these symptoms, it IS possible you have an infection.  Boo!  And it’s safe to say, I’m the worst patient when it comes to taking pills.  You have to take these meds 4 times a day…I’ve already missed 2 doses.
On another note, let’s hope I look better in person than I do in pictures…eek!  35 weeks… 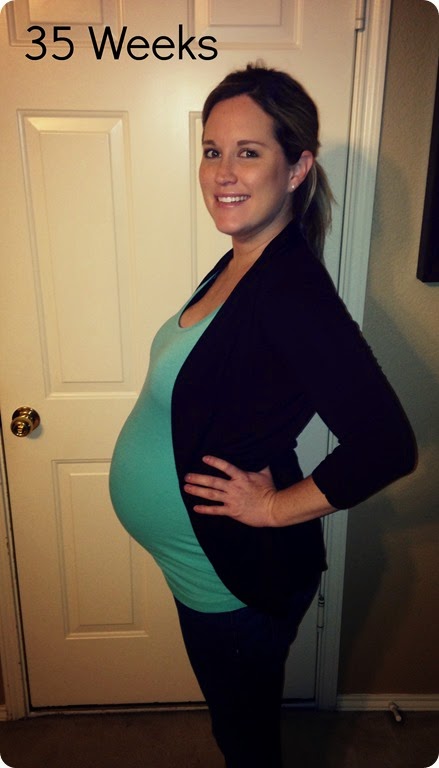 How far along?  35 weeks
Total weight gain/loss?  30 pounds total (2 pounds this week)
How big is baby?  Size of a coconut.  According to Baby Center, my uterus has grown 1,000 times its original size.  Wow!  It also said I would probably gain 1/2 a pound a week from here on out.  That made me laugh out loud.  I gained 2 pounds this week and last pregnancy I gained 12 pounds in ONE month towards the end (I think it was around this same time).  Baby won’t grow as much in length, but will plump up.  His hearing has fully developed…I’m sure this baby has no problems hearing his brother yelling at him.
Stretch marks?  No.
Sleep?  As I mentioned before, I can’t wake up with less than 7 hours lately and I have been taking short naps too.  I dread sleeping with the pain I get in shoulders the next morning.
Fitness?  You bet…still actively cleaning like crazy, lifting my 30 pound toddler, chasing him, and moving items that people would probably tell me not to, if they saw. 🙂  I honestly see no point in working out this late in pregnancy as I have to stop every 5-10 minutes to pee.
Best moment this week?  Having 2 days to get some things done around the house, even if it was interrupted with an infection!  Mom, you are the best!
Miss anything? Haha, umm yes!  I’m officially okay if little man decides to come.
Food cravings?  Sugar and water.
Anything making you queasy or sick?  No.
Current Symptoms? Still the same as before with addition of the back pain and mastitis.
Belly button in or out? Out.
Wedding rings on or off? Off.
Mood?  Frustrated.  I normally move around a lot and I just can’t right now.

This pretty much sums up my photo shoot with B…turning his head away, spitting on my face, NOT giving me a kiss, and trying to escape my arms. 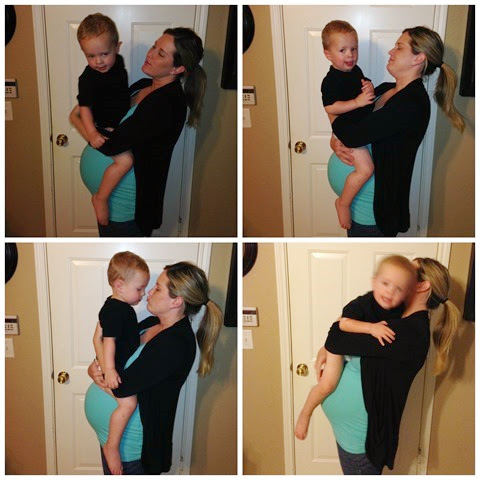 And a comparison from Pregnancy #1 and #2.  I need to take a belly shot to really see the difference.  I’m much more “out” and lower with #2.  Maybe that’s the difference between a breech baby and a head down baby. ?? 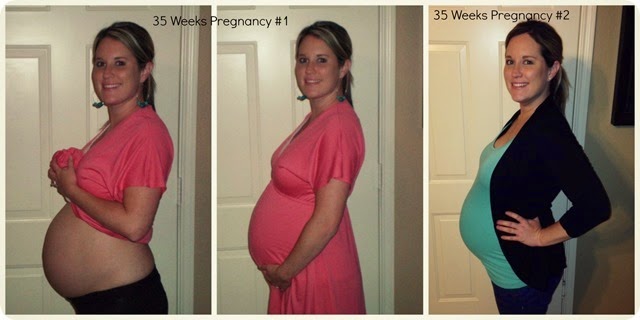