2015 really flew by, but also seems like such a long time ago.  At the beginning of the year, I had a 6 month old and was still exclusively pumping (and still was up until 6 months ago).  Yikes…that seems like a life time ago.

I like to recap the year with some highlights (even if small) and also wanted to share some top blog posts you guys found most interesting (or at least got the most views/interaction).

My July Goals post.  I shared my goals for the month.  I always love reading about people’s goals as well and how they set them. 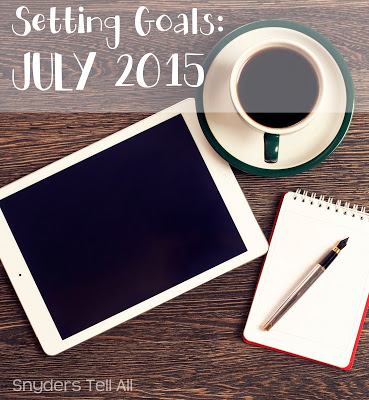 One of my Groceries post in March.  Sometimes I’ll share what groceries we buy for the month to show you how much we spend and on what.  These also help me stay accountable. 🙂  I plan to do more of these next year. 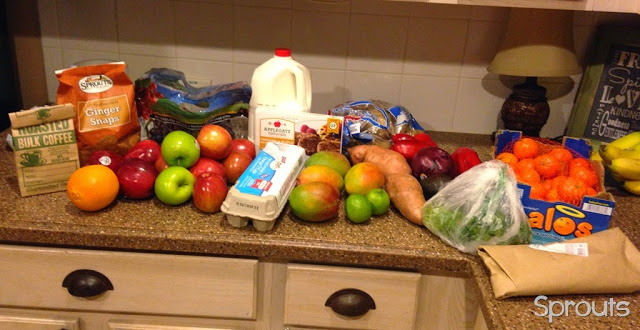 My Day in the Life post from November, just a month ago.  I LOVE reading people’s day in the life posts as well.  I plan to do more of these in 2016 also. 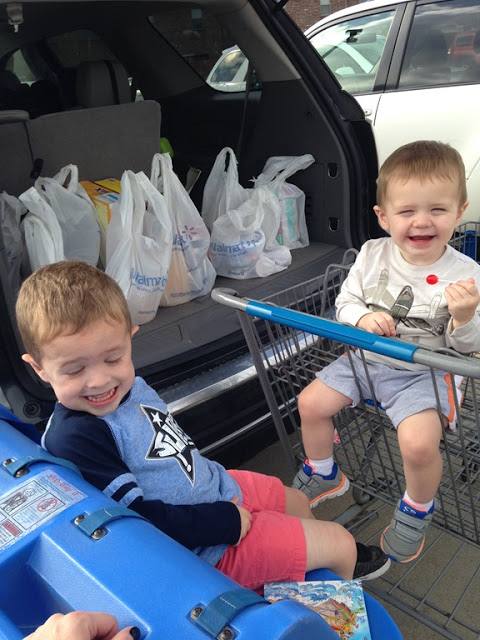 Lots of love for when I shared a FREE chalkboard printable back in April!  Apparently I need to give away more printables 🙂 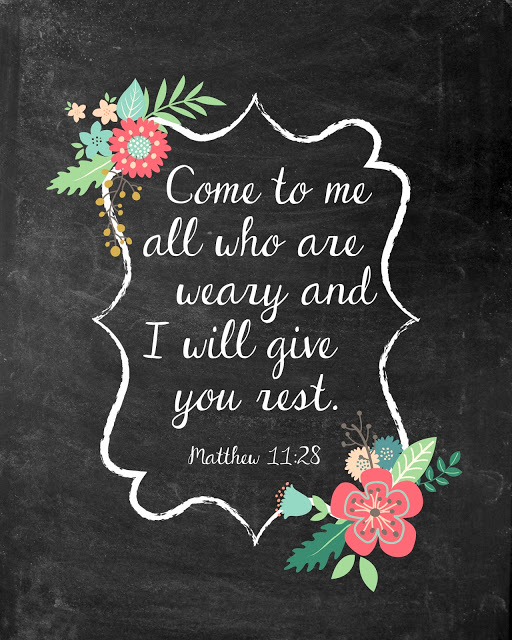 And the top most viewed post was when I shared 5 tips to living on one income back in April!  I’m actually really encouraged to see that because it shows me that a lot of us are in the same boat and wanting to learn how to thrive on one income.  Whether you make a lot or a little, managing your money is difficult, even more so if you don’t make a lot or have enormous amounts of debt.  We’ve really only “lived” on two incomes for less than a year after we paid our house off and were both still working.  Other than that we always used my income (and part of his) to pay off the house (and of course now we live off his teaching salary while I take care of kids from home).  Thankfully I’ve been able to bring in some extra income with my shop, which has helped to take care of some of the increased expenses of having kids.  And taken the stress off a bit since cutting our income in half in 2012 when I quit teaching.  In the famous words of Dave Ramsey, “I’m doing better than I deserve” and I need to recognize that more! 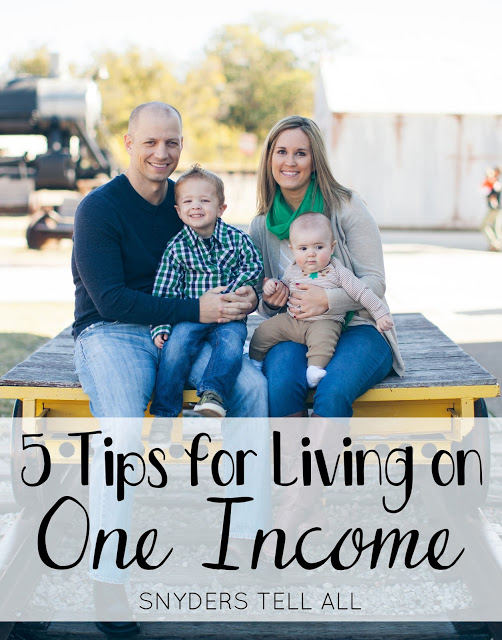 Thank you to each one of you who takes the time out of your busy lives to read my blog.  I truly appreciate it and hope it’s a light on this crazy internet world!

Now for some of my favorite moments from the year! 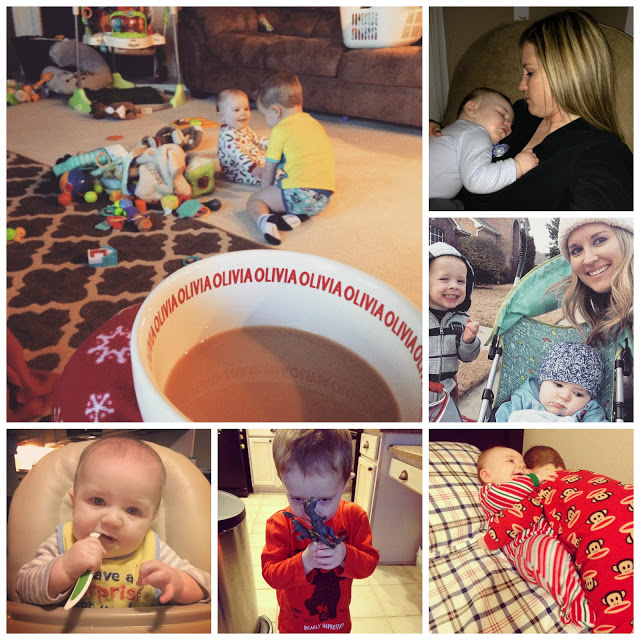 In January, Maddox started eating solid foods, Beckham became obsessed with dinosaurs, the boys started really interacting with each other.  We spent great days at home, went on walks, and Maddox FINALLY started becoming an easier baby.  #praisejesus  I also shared my “crazy” over at my friend, Erika’s blog.  If you want to feel better about yourself, just read it 🙂 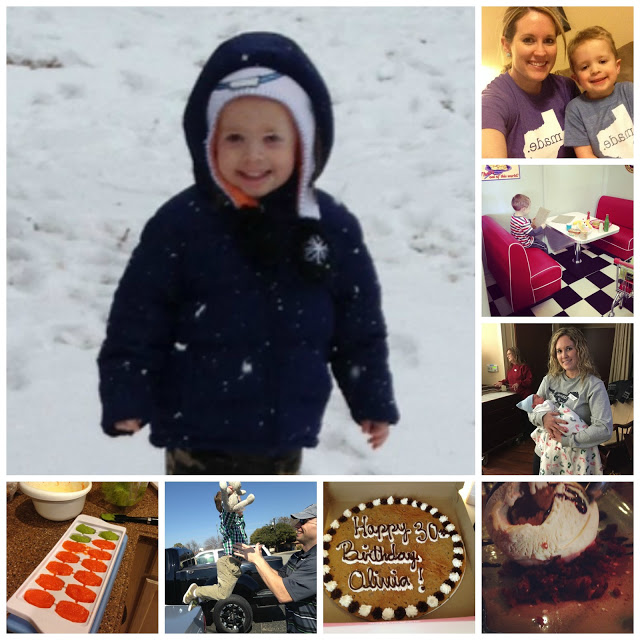 In February we got our first big snow!  We had some fun play dates, Maddox started eating my homemade baby food (which lasted about a couple of months…#notime).  He’s no fan of being fed…hand him a spoon or fork and he’s much happier…the intro to solids phase was much more difficult with him.  I turned 30 years old and celebrated with bacon pizza, bacon ice cream, and a movie, as well as welcoming my nephew into the world! 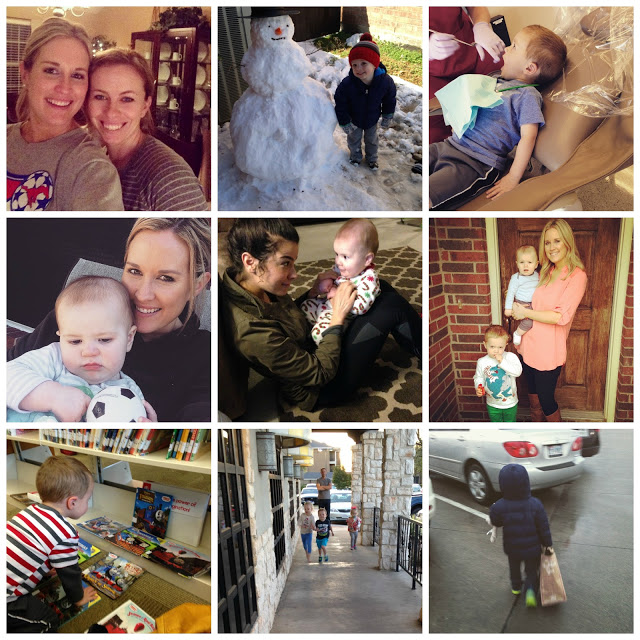 March we had visits from a few people far away.  My childhood friend, Shannon, and her two boys came to have a play date when she was in town.  My best friend, Brittany, visited during one of her trips from Waco.  And Ryan’s cousins came into town and we played at the park and went to dinner.  It also snowed again and we built a snowman.  Beckham had his first dentist appointment ever!  And slow days were filled with library trips, outside playing, and just Maddox and I at home while B was at pre-school. 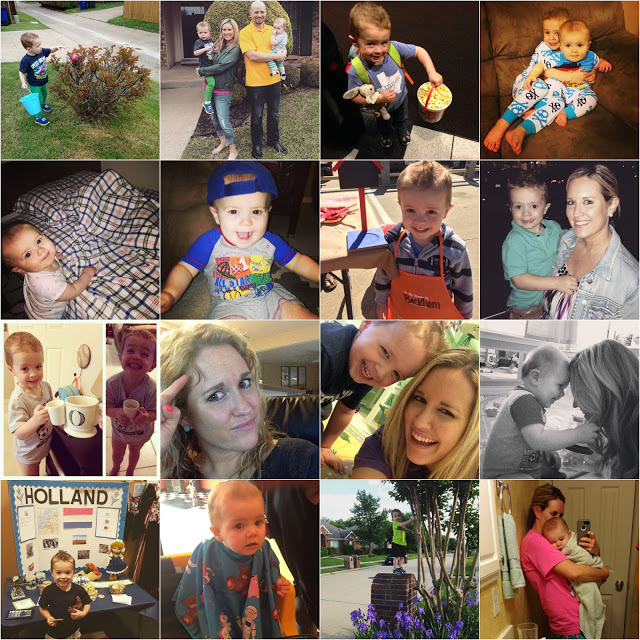 Lots of good memories in April.  Maddox’s first Easter.  Maddox’s first haircut (he hated the sheers…still does).  Beckham’s first movie in the theater (he lasted 20 minutes).  First matching pj’s.  Maddox gets cuter and cuter.  He also had his first Emergency room visit for a SORE THROAT!  My baby hair that I lost post baby started to grow back in.  B studies Holland at school. 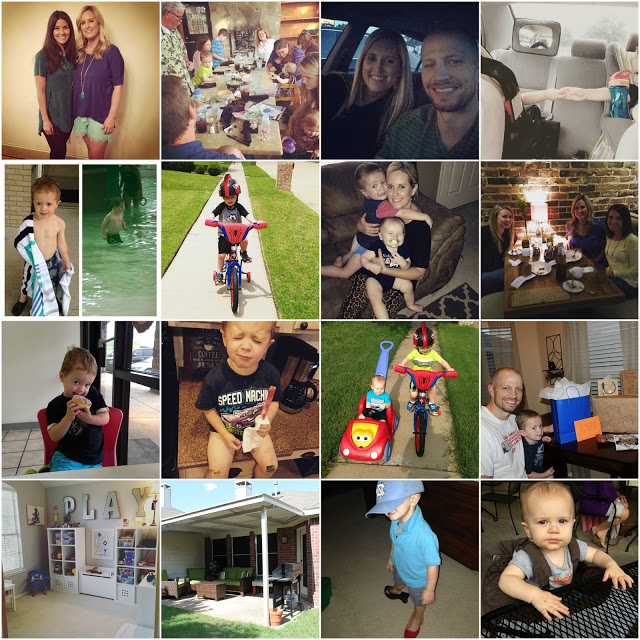 May was highlighted with Ryan’s birthday and Mother’s Day.  My sister came in town so my whole family got together (restaurant pic above).  Beckham started swim lessons for the first time.  Enjoyed a girls night out.  We updated our backyard and added a cover to the porch.  I also painted the play room TWICE…grays are so hard to figure out. 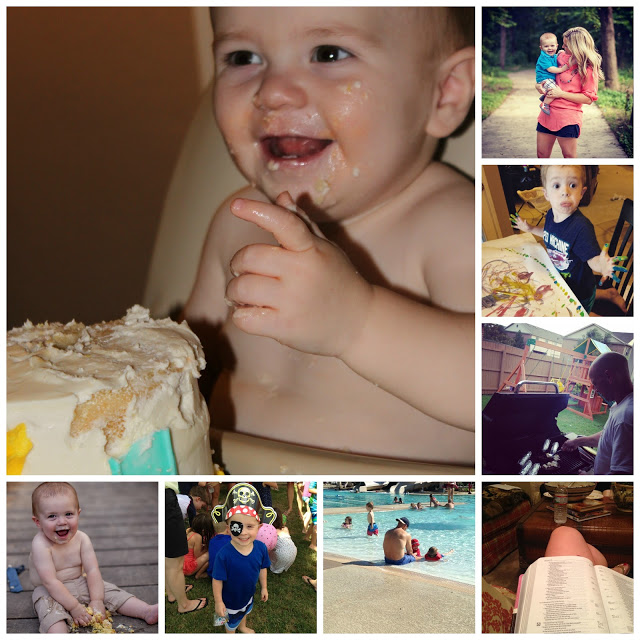 In June, Maddox turned ONE!  We celebrated with a “You Are My Sunshine” party.  We spent time at the pool and grilled out a ton.  I also started my yearly summer Bible study with some great gals! 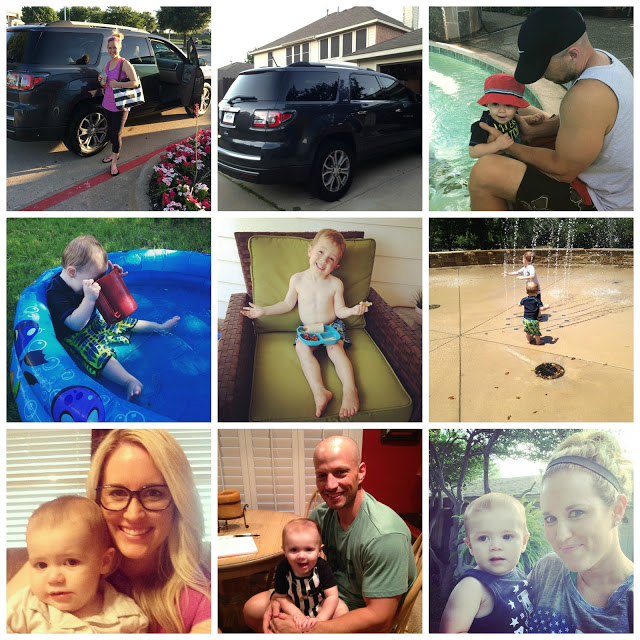 Lots of summer activities in July.  Swimming, playing outside, and splash pads.  Big news in July was me getting a new car after 10 years in my old one and also getting eye glasses! 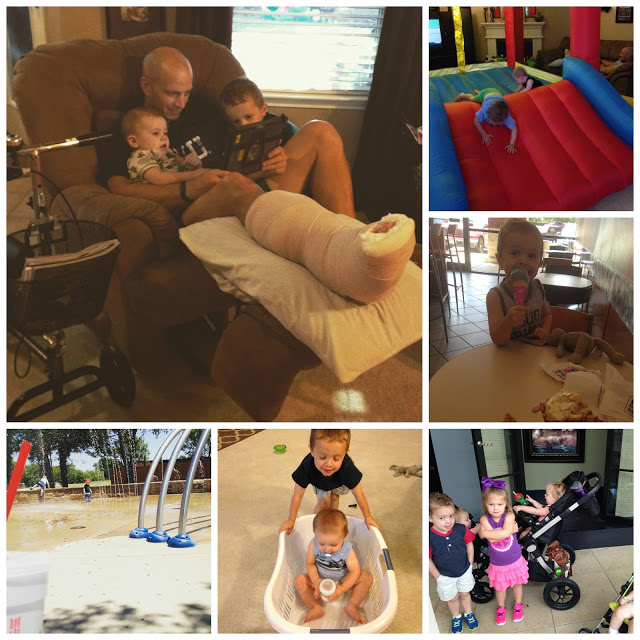 I remember August being a difficult month managing things.  Ryan had surgery at the beginning of the month and was completely off his foot for several weeks.  We even had to drive him to school for a couple weeks.  August is miserably hot in Texas so we played on the bounce house several times indoors or were in some type of water outside.  Ryan and I also celebrated our 8 year anniversary! 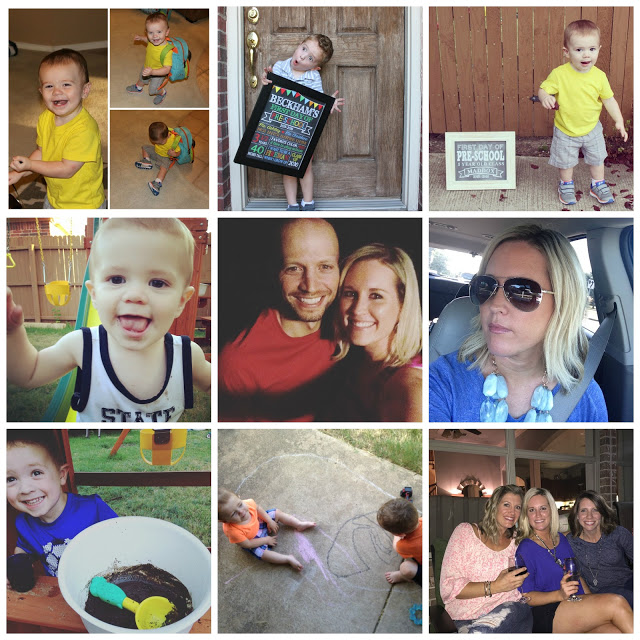 Beckham and Maddox started pre-school in September.  Beckham, in the 3 year old class and Maddox, in the 1 year old class!  Ryan and I had a date night!  Also a girl’s night!  We played outside a lot and I chopped my hair off…which I will never do again! 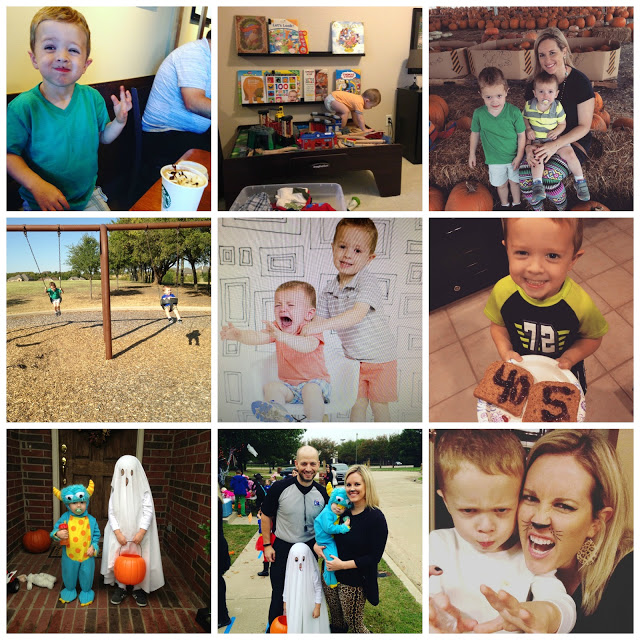 In October, we had Starbucks dates, park dates, and visited the pumpkin patch.  Maddox started climbing everything. I laughed my head off when I saw Maddox’s school pics.  Beckham became obsessed with numbers on his toast 🙂  And we had some Halloween fun! 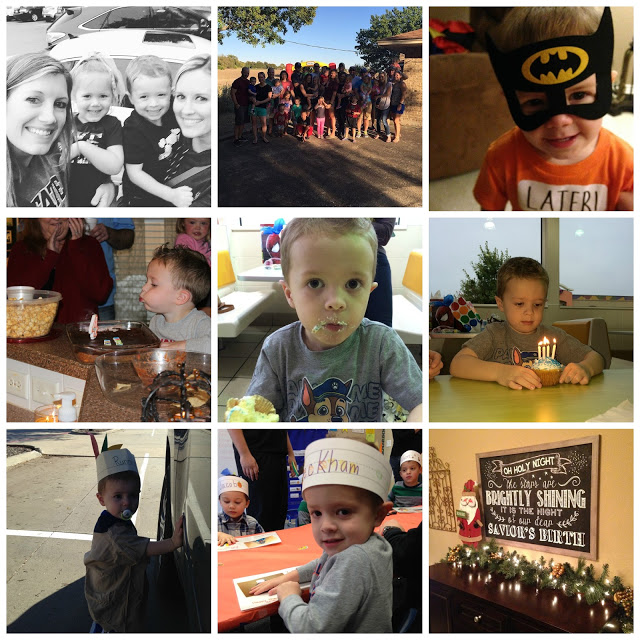 In November, we hung out with friends (that group pic is actually from October, but I already made the collage and don’t want to change it) 🙂  Beckham turned 4 years old and we celebrated at McDonalds!  The boys celebrated Thanksgiving at school with Indian hats.  And I started decorating for Christmas! 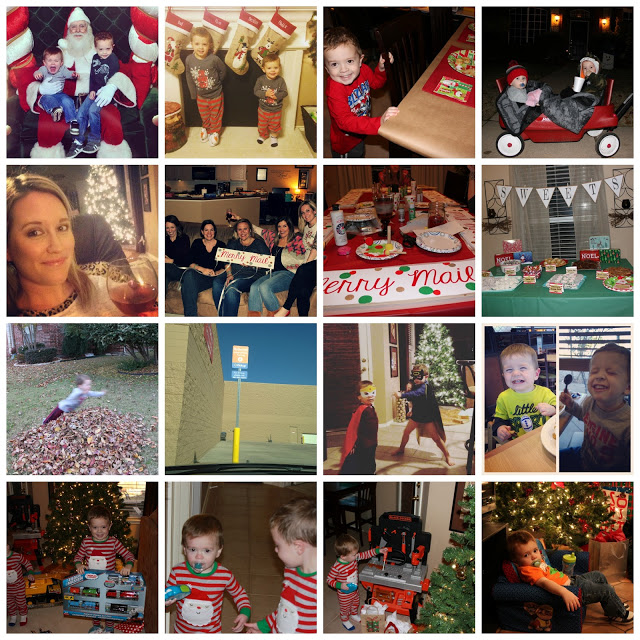 December was busy as it is for most of us.  The top row of pictures are some activities we did – visit Santa, go look at Christmas lights, welcome Elf with a North Pole breakfast, and go on a wagon ride with hot chocolate to look at lights.  I threw my own little Christmas party with some girlfriends and I already can’t wait for next year.  We also enjoyed jumping in leaves, fighting as superheros, lunch dates, and I discovered the greatest way to grocery shop.  And finally we celebrated Christmas with family.  This year we made it a goal for Beckham to show appreciation for his gifts and act polite when opening them and I think he did that this year!  I’m proud of him.  We rung in the new year with my brother and sister in law…they spent the night and we had homemade cinnamon rolls to start off 2016!

I’m excited about the new year and can’t wait to see what 2016 will be like.  I will have my goals up this week!

This post always takes FOREVER to put together, but I like including some of the smaller moments because, let’s be honest, those are some of the best.  I will always remember these daily moments that make up so much of life right now.  It’s not always sunshine and rainbows, but it’s always a blessing!  I have to give a huge shout out to my husband who supports me staying home with my little babies…over half of these memories wouldn’t be here if not for him!  Thank you Ryan! 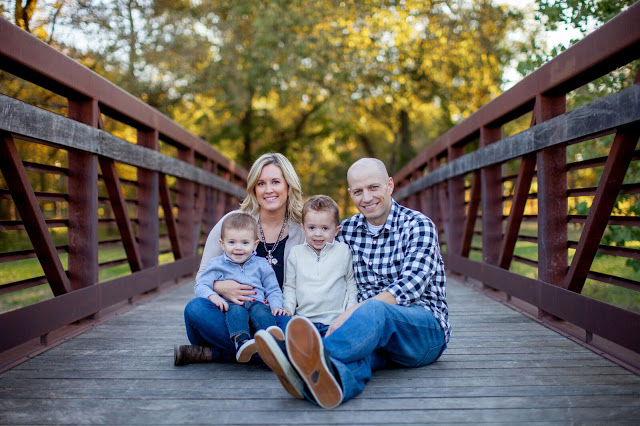